My desire to explore the unexpected led me to talk to two sets of parents about their journeys through adoption and into being a family.

When adopting, these couples experience trials they had never have imagined. Some of the unique hurdles they faced were predictable, while others were completely unexpected.

Frances and her wife, Gaynor, knew adding a child to their household wouldn’t be easy. It wasn’t. The women  tried several methods to grow their family and were unsuccessful. After a failed attempt at artificial insemination, considering egg donation, and two failed adoption attempts, their hearts and finances were strained to the point of breaking. That was when Scott came into their lives.

“Scott was two when we adopted him,” says Frances, curled up on the couch in her living room. Frances and  Gaynor had discussed how they would help their son to understand that their family was different from others. They wanted him to feel confident if challenged about his family and to have the ability to talk as much, or as little, about his life as he wanted. They were, by most standards, prepared–not for everything, though.

Because Scott wasn’t an infant, he had established ties with his caregiver-–his maternal grandmother–-and an open adoption was important. This wasn’t a situation Frances and Gaynor had prepared for. They were thankful for the adoption education courses they had taken, but nothing could ready them for the unexpected challenge of establishing boundaries with Scott’s birth family.

“We weren’t interested in open adoption at first,” Frances says. “I find the openness has been good–-it helps to know them–-but we had to find boundaries.”

Another unexpected issue for the parents was the different perceptions about same sex couples that other  countries have. On a trip to Disneyland, Frances, Gaynor, and Scott approached the U.S. Customs desk “as a family,” as per the posted signage. However, as many same-sex families have learned, the 1996 US Defense of Marriage Act still stands when it comes to border crossing. The act does not recognize same sex couples as a family, regardless of their marital status in their home country.

“The border guard said, ‘In our country, you’re not a family’,” Frances says, still showing her frustration. “We  talked about it (with Scott) afterward. He was confused, and we explained that there are times when it’s important to say things. This wasn’t one of those times. We would have lost our trip.”

This difficult lesson taught the family to choose when it’s important to stand up and say something, or to correct someone, and when to leave thing be.

“Scott’s very open in his class,” says Frances. “He’s proud about his adoption, and he’s marched in the gay pride parade and thinks that’s cool. We try to give him exposure to everything in life. We live in the right province [to be able to do that].”

Finding daycare for Scott presented another challenge. Frances and Gaynor asked the daycare leader how she  would handle Scott’s parentage if it came up. They were told he couldn’t discuss it.

“She wouldn’t allow him to explain that he had two mothers,” Frances says. “They wanted him to lie.”

Kids Scott’s age may already be programmed to expect a mother and a father instead of two mothers, so Frances and Gaynor are also careful with playdates.

“I don’t want anyone to be uncomfortable,” Frances says. “We want to let the other kids’ parents sort it out with  them [the kids].” 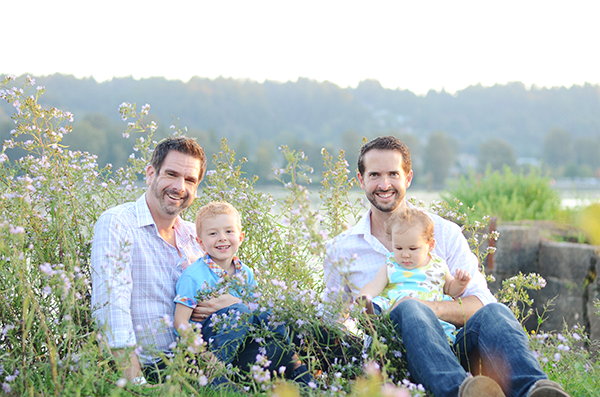 Darryl and Ian began planning their family in 2007, while on their honeymoon. I was able to speak with both  “Poppa” and “Daddy” while meeting Oliver (then three, now four) and Elizabeth (then four months old, now 17 months) in a visit to their home.

Darryl and Ian anticipated that they would face challenges during the adoption process. They talked about finding the “right” adoption agency and knowing they needed a plan.

“We weren’t oblivious to it [the challenges of being a gay couple trying to adopt],” says Darryl. “We were on the  cusp of ‘it could happen or it couldn’t’.”

He credits his husband, Ian, with making things happen. “If a door closes, he’s going to bust down three more,” Darryl says proudly.

Ian explains, “Each time something happened [to prevent us from adopting] I said, let’s figure out how to make  this happen. We went through the private adoption route because we wanted a newborn.”

Oliver joined the family when he was born, matched by their agency. With Elizabeth, they were chosen by a birth mother through the Canada Adopts website and were in the delivery room when she was born.

Open, active, and engaging, Oliver is a confident child. I barely set down my camera and notebook, when he asks me to see his room. I follow him and see firsthand how Poppa and Daddy have given him solid roots.

He picks out four trucks–-one for each of his parents, one for himself, and one for me. When I ask, “What about Elizabeth?” he immediately grabs a baby-sized truck and sets it by his little sister’s bedroom door so she’ll have it when she wakes from her nap.

“The only time he threw us off was when we were [dealing with an issue] and he said, ‘I want my birthmommy, I don’t want you guys,’” Ian explains. The couple says they did everything wrong in that moment. Now they simply see it for what it was–-a toddler acting out.

Far from oblivious to the stereotypes of the world, Darryl and Ian picked their neighbourhood knowing they would fit in. They laugh about how one of them out with the kids gives the impression of “dad giving mom a break” and possibly being incompetent, while when they are together with the kids, there is no issue.

When adopting Elizabeth, Darryl and Ian hadn’t anticipated Elizabeth’s birth mother having concerns about  Oliver’s feelings. Elizabeth’s adoption is open, while Oliver’s isn’t, and the birth mother worried how that might impact Oliver. “Our philosophy is, whatever comes our way, we talk our way through it,” says Darryl.

Frances, Darryl, and Ian agree that “other sex” role models are important. For Frances and Gaynor, that means struggling to find the right male figure for Scott. “He sees a lot of guys when we’re with others,” Frances says. “Most of our friends are straight, but there is no one person he has bonded to.”

Darryl and Ian both have sisters, and they know that there will be some strong female role models in Elizabeth’s life. “They are fighting over each other,” Ian says about who gets to be Elizabeth’s primary female figure.

Another issue both couples have experienced is with forms. Provincially, there is a steady movement to change forms to “parent and parent” from “mother and father.” Federally, the change has yet to materialize.

“For such things as a SIN card and passport, the whole federal system is built on using the mother’s maiden name for security purposes,” said Ian. In Oliver’s case, they used Ian’s birth surname (Ian changed his last name to Darryl’s when they got married). “Birth certificates in BC now say parent and parent.”

Perhaps the hardest issue for the parents is when one partner is addressed as the “grandparent.”

“I wasn’t prepared for people assuming that Gaynor was the grandmother,” Frances says.

Darryl and Ian experienced the same issue in an unlikely place–-on a visit with Santa. “I’m pretty sure Santa was gay,” says Darryl. “And he still called me the grandfather!”

Expected and unexpected challenges aside, both couples say that their family is well worth the issues they have experienced. They know how to waltz around the unexpected puddles now and will face the unseen with grace because of their experiences.

Ian sums it up. “We feel like we won the lottery. Twice."

Proudly adopted, Ronda Payne joyfully lives in Maple Ridge, B.C., in yet another renovation-project home with her husband and their pets. She is a regular contributor to a variety of publications and also has three (or more!)  books on the go.