Everyone has a story: Meet the Calhouns | Adoptive Families Association of BC

Everyone has a story: Meet the Calhouns

Like many couples, John Calhoun and Carly Bates found their way to adoption after experiencing infertility.

It wasn’t an out-of-left-field choice for them, though. Carly says she told John on their first date that she wanted to adopt. It just took them a few years to get there. They knew they wanted to experience what it was like to  parent a newborn, so they chose to pursue local infant adoption through an agency. Just four months after  completing the application process, they were chosen by the expectant parents of a baby boy. Two weeks later, on a snowy day in March, they brought home their fifteen-hour-old son, Cash. They always knew they wanted a large family eventually, but on that day, they never dreamed that their first child would be the youngest in a family of six by the time he was three years old. 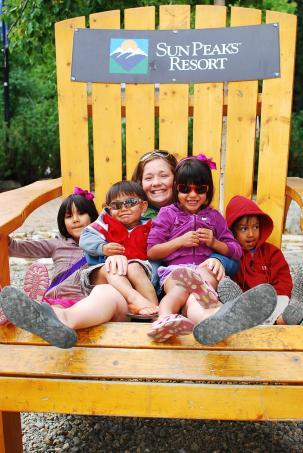 When Cash was a toddler, John and Carly decided they were ready to add to their family again. During their first  adoption process, a social worker had mentioned she thought they would be “great candidates” for adopting  through the Ministry of Children and Family Development (MCFD). They chose that route for their second  adoption, but this time around, things were a little more complicated. “Our experience was very emotional,  frustrating, rewarding, positive and completely overwhelming at times,” says Carly. “Our frustrations got solved, but when you’re drowning in them you feel like nothing will work out.”

She emphasizes the importance of being open and honest with yourself and your social worker about what you’re prepared to take on in terms of special needs, openness, and other considerations. Just because you said no to a certain illness or diagnosis doesn’t mean that later you can’t change that, and vice versa.

They inquired about many children whose profiles they saw on the MCFD bulletin, but none of them were a  match. One of those inquiries was for a sibling group of three. The response, says Carly, was that they shouldn’t bother, because the children “had been in the system for a long time and were on hold.” At an Adoption Resource Exchange meeting, though, one of the video profiles was of those same kids.

“We quickly asked which one was their [social] worker and we headed straight to her on break, and that set the ball rolling,” says Carly.

Those kids turned out to be Angie, seven (now nine); Louis, five (now seven); and Roxy, four (now six), a busy and vibrant trio of biological siblings who share their adoptive parents’ energy, creativity, openness and warmth. John and Carly were immediately smitten. After a months-long process of preparation and transition, the three moved
permanently to the Calhoun home, doubling the size of their family.

It’s all worth it

For John and Carly, choosing to embrace adoption also meant choosing to embrace another culture. All four of  their children have First Nations heritage. John worked in a Northwest Coast First Nations art gallery for years, which gave him a foundation in Coastal artwork, culture, and traditions. Carly also discovered First Nations  heritage in her own geneology. The family enjoys exploring the kids’ cultural heritage. They attend Aboriginal events throughout the Lower Mainland such as the Talking Stick Festival and the Nisga’a New Year celebration at the PNE.They also created a cultural plan with their social worker for the three older children, and plan to connect with a worker from their band who can introduce them to more of their culture.

Becoming a transracial adoptive family of four kids within in four years is an uncommon path, but the burgeoning household has been surrounded by cheerleaders. “Our families have been very receptive and supportive,” says Carly. “It’s been a very positive experience. Most other people are just curious or amazed that we have four [kids] in such a short time.” They purposely cultivated a strong support system that includes professionals such as their social worker and key worker, therapists, and school support staff. They attend all the adoption events and cultural events they can, and keep in touch with adoptive families they’ve met over the years.

John and Carly are refreshingly honest about both the struggles and the joys of raising their boisterous brood. Life is busy and full as they juggle the kids’ school, their own school, and work commitments (Carly works at a coffee shop and John is training to be a teaching assistant), social and cultural events, medical and therapy appointments, homework, the kids’ individual needs, and the general chaos of large family life.

“It’s very overwhelming,” says Carly, “but so rewarding. We have four beautiful kids who teach and surprise us every day. Every part is worth it.”