Everyone has a story: Meet the Eislers | Adoptive Families Association of BC

Everyone has a story: Meet the Eislers

Within our first year of being married, my husband and I knew that building our family may come by way of adoption.

I suffered from debilitating but undiagnosed pain, and doctors raised the possibility of a hysterectomy. It took another 14 years of pain and failed attempts to conceive before I found a doctor who finally diagnosed me with endometriosis.

My age and the severity of my condition left us with a decision to make. My husband and I were considering an attempt at in vitro fertilization (IVF). The relief of finally knowing the cause of my pain and infertility took the place of grief or loss, however, and we decided to set IVF aside and embark on the path of building our family through adoption. Our hearts were open and ready.

As we explored the adoption process, we met with a woman who had helped families with Haitian adoptions. We immediately felt drawn to the country. However, I quickly learned that best-laid plans don’t always mean things will fall into place. In fact, sometimes the opposite happens.

First of all, our initial social worker turned out to be unreliable and unprofessional. She continually missed appointments, didn’t return phone calls, and even wanted to meet in a coffee shop for our visits, which would have been incredibly awkward due to the personal subject matter involved. We finally complained to the agency and were assigned a new social worker within a few days. We started our home study right before Christmas in 2008.

Next came the process of compiling our dossier, which turned out to be very confusing. We needed direction, but were nervous to bother our agency, which resulted in a lack of communication and more delays.
In the meantime, we received news that the orphanage we had hoped to work with in Haiti had taken on too many families; they were struggling with keeping up and would not be able to add us. We researched a few other international programs, but nothing felt like a good fit for us.

While we looked into our options, we attended a Transracial Parenting course with the Adoptive Families Association of BC. On the first day we talked about why parents choose which program and country from which they’ll adopt. We heard people say that they chose certain countries because they were cheaper, the process was faster, or they were more likely to have babies available. Our hearts were convinced. We’d looked outside of Haiti because we were scared of how old we might be by the time we were able to adopt. We left feeling more certain than ever that we should move forward with Haiti, no matter how long it took.

Eventually the woman we had originally met with let us know about another orphanage, which was ethically run by a Haitian woman who had an incredible heart for her country and its children. We decided to move forward with this orphanage and sent our dossier in 2009.

We endured another heartbreak when we were matched with a child, only to find out that her grandmother returned to the orphanage and took her home. After taking some time to come to terms with the change, we were matched again with a squishy-faced 10-day-old baby girl!

In December, we were told it was time to travel to Haiti to sign the first set of official documents. We planned to travel in the new year, but on January 12, 2010, a devastating earthquake hit the country.

There isn’t enough space to truly share all we felt as we watched what Haitians in Port Au Prince faced following the earthquake. We struggled with feeling selfish, with grief and fear for each face and story, and with anguish over what our daughter-to-be might need.

“Operation Stork” to the rescue 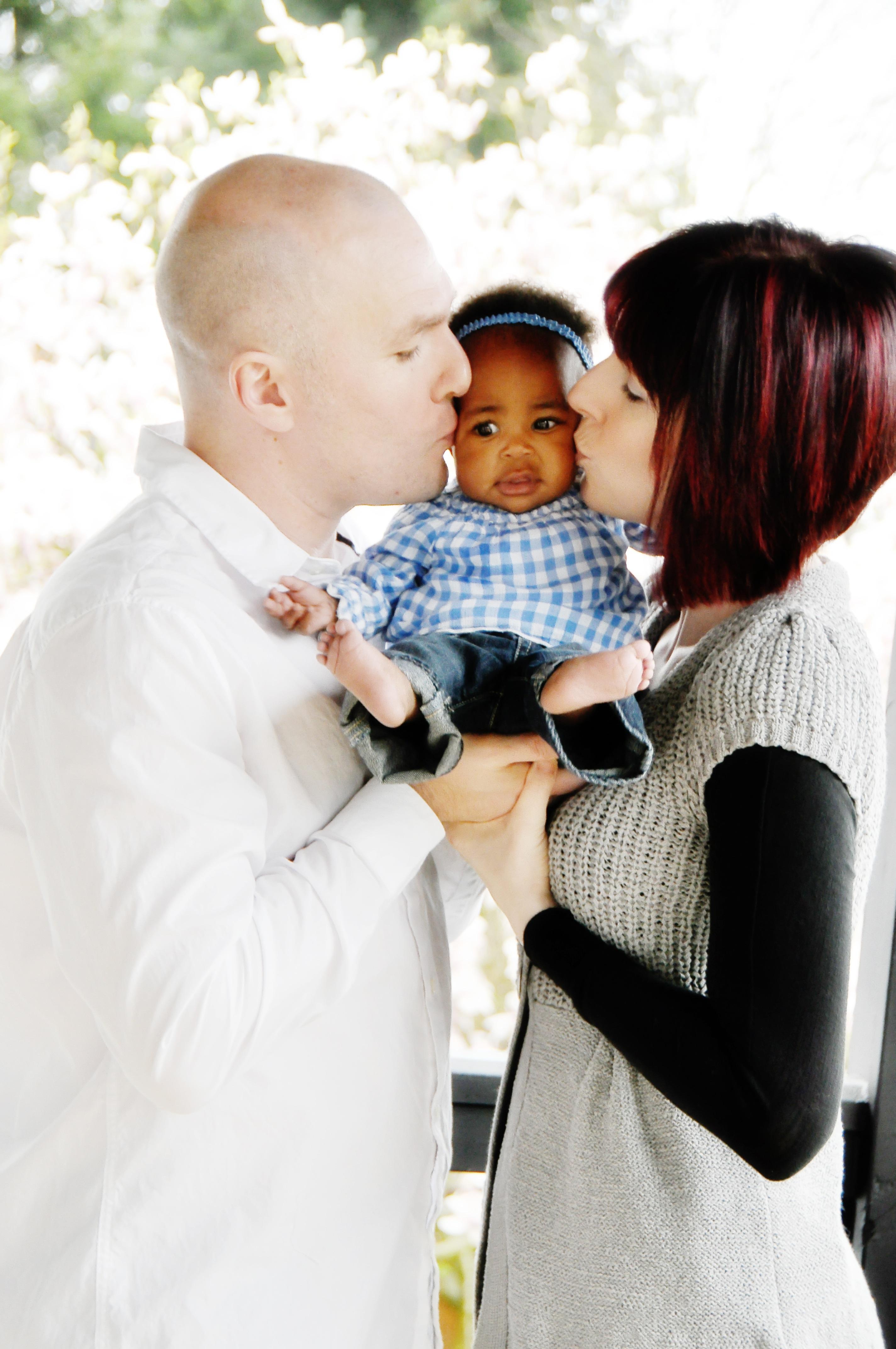 Literal miracles had to happen to bring our daughter home, and they did. With countless prayers and the support of friends, family, co-workers, some incredible staff at AFABC, our MLA and our MP, we made it through. Sixteen days after the earthquake, we received news that she was going to be flown out on an Air Canada “Operation Stork” flight to Ottawa and that we would meet her there.

Nathalia came off the plane sick from a reaction to her baby formula, and with a mild infection. We soon realized she was lactose intolerant. Multiple parasite tests came back negative; but, over the next year, she developed three more intolerances. After a lot of research in her third year home, after the onset of the fourth food intolerance, we chose to (successfully) treat the whole family for parasites.

I personally struggled with fear and anxiety during my daughter’s first year home. On the second anniversary of the earthquake, I was hit with the brunt of the emotions connected to what we went through. Counseling has helped me in work through those feelings.

My experience of parenting has been pretty incredible, and I love watching Nathalia grow and change. Almost five years later, I still wake up feeling thankful I get to be her mother. At the same time, I’m always aware of the losses she had to endure to join our family. We are careful to keep her First Momma in our conversations, and we were also able to have a photo taken with them together that we keep close by.

We have Haitian art, cookbooks, and music in our home to keep elements of her birth culture in her  surroundings. We celebrate Karnival with other families with Haitian children in our area thanks to an amazing family who hosts the event, and we meet up throughout the year to visit.

We haven’t experienced very much pushback due to being a transracial family, although looking different opens us up to questions from strangers. The bulk of the questions have been polite, albeit sometimes intrusive. I think most people just don’t know how to ask. That said, I’m very conscious of how things are worded. I’ve learned that my response affects my daughter’s confidence in answering those questions herself when she’s older. What we face as a family is a drop in the bucket compared to what she will most likely deal with as she grows up.

Emotionally, we’re careful about how we deal with behavioral issues. My daughter has the most joyful soul of anyone I’ve ever met, but when she’s a typical naughty toddler, we’re careful with how we react. Her spirit is easily wounded, and no matter what, I never walk away from her because I’ve seen that it truly impacts her.

Our social worker advised us during our home study to practice “time-ins.” This means the punishment does not involve separation from us, (such as the traditional command to “go to your room”). It’s important to me that she understands her behavior will not impact her ability to be around us. At a very young age, she seemed to think that we were personally rejecting her if we turned our back or tried to walk away when she knew she had done something wrong. Now she knows that our love is based on who she is, not what she does.

Last summer we took a big step and sent our second dossier to Haiti. This time we are starting an adoption in the midst of a transitioning program, because Haiti is in the process of becoming Hague-compliant. As a result, we’ve experienced some delays, tears, and disappointments. A year or so from now the steps of the revised Haitian adoption process will probably be more clear. I have faith that Haitian Social Services will create an adoption process that will honour the best interests of the children, and the dreams their first families have for them in the wake of loss.

Nathalia made it home despite all the odds stacked against her, and I know this next child will too. Becoming a family through adoption isn’t easy, and finding the balance between being patient and staying sane can be difficult. The steps aren’t always easy, the journey can be tiring and peppered with unanswered questions and rarely accurate “suggested timelines.” Above all else, I’ve learned never to measure my journey against that of anyone else.

The story that’s being written for you and your child is unique, and comparison is the thief of joy. Bonding and learning more about yourself and your child will start at their homecoming. As they become a part of you, and your stories weave together, you will see all the beauty that comprises the word “family.”

Michelle Eisler discovered how much she wanted to be a mother at exactly the moment she thought it might not be possible. Since Nathalia came home Michelle has taken to baking, reading, using her imagination, throwing dance parties and watching all sorts of Disney creations. Her professional transition from management to motherhood was more rewarding than she ever imagined.