Everyone has a story: Meet the Berg family | Adoptive Families Association of BC

Everyone has a story: Meet the Berg family 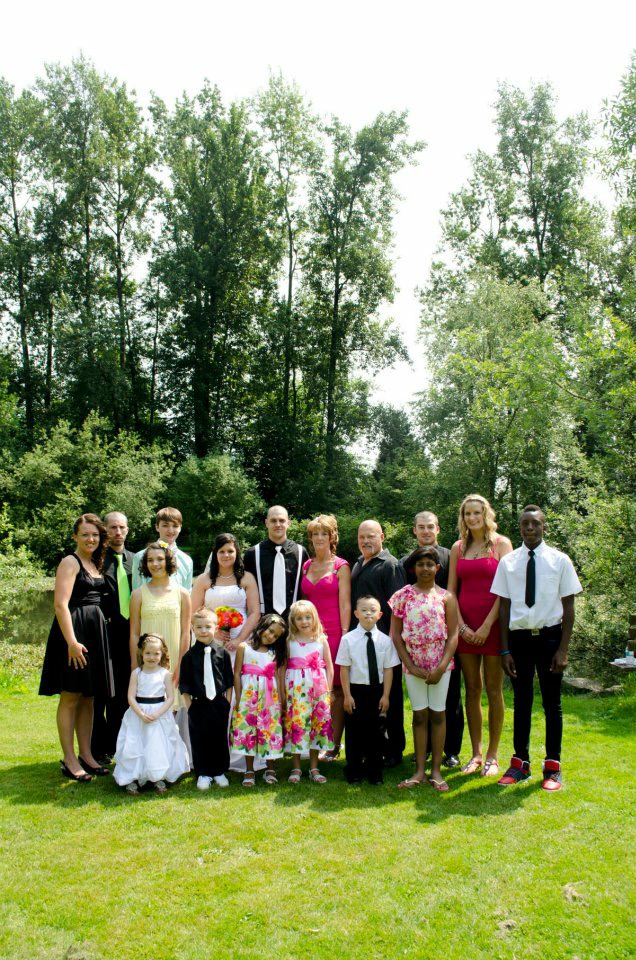 Janice’s interest in adoption started when she was just a little girl. She remembers one of her favourite childhood games was to play “adoption agency” with her dolls. She’d line them all up on her bedroom floor and then choose one or two to “adopt.”

That idea obviously had staying power. On her first date with her future husband, Don, she told him that “It doesn’t matter how many children we have, I want to at least adopt one.” In the 32 years since that unusual first-date conversation, they’ve gone on to welcome 14 children through biology and adoption.

In the early years of their marriage, Janice and Don lived in Alberta. After adding three biological children to their family, they decided to enter the adoption process with Alberta Child and Family Services. They were open to all special needs and a wide range of ages, but the wait dragged on and on. During that time they had a fourth biological child and also became foster parents, “To get a feel for the system, and because I love kids,” says Jan.

Finally, after eight years, they were matched with a seven-month-old girl who is now about to graduate from high school. She was diagnosed with autism as a toddler, introducing what would be the first of many special needs to the incredibly diverse Berg family.

For their next two adoptions, the Bergs turned to the United States. After a heartbreaking failed match in Oklahoma, they were contacted out of the blue by an adoption agency in Arkansas. “To this day I don’t know how that adoption agency got our name and how we got matched, other than through my Christian faith,” says Janice. That agency matched them with the baby who would become their son.

Four other private international adoptions fell through after that; but a series of twists and turns, and a fifth failed match, led to their adoption of a daughter, also from Arkansas. “Right after she was born, before we flew down, someone put the phone up to her ear so I could talk to her,” remembers Janice.

Next came a move to British Columbia and, sadly, a miscarriage. The Bergs settled into their new home and decided to adopt again, this time through the Ministry of Child and Family Development (MCFD). A six-year-old boy with Down syndrome joined their family, followed by a four-year-old girl with global developmental delays and chronic kidney disease.

In each case, the children’s foster parents fought the adoptions, which made the transitions stressful. Both kids used cribs, bottles, and diapers when they arrived. Janice recalls the girl couldn’t chew and still played with rattles. Once they settled into their new family, though, they quickly moved on from “baby things” and began to thrive.

What made the difference? Unconditional love, and providing plenty of options and choices. “Yes, a child may have some special needs and delays, but that doesn’t mean we should treat him like an infant,” says Janice. “I remember asking Matthew if he wanted to play with cars or not. His eyes got all big, like he was thinking, ‘Really? I can decide that for myself?’ He was six years old and he’d never been given choices before.”

At this point, with nine kids, Don declared the Berg family complete, “Unless someone drops a kid off on our doorstep.” Soon after, Janice and Don came home from a trip to Alberta to their phone ringing off the hook with calls from social workers. A friend’s recent adoption of a little girl was breaking down. Could the Bergs take her, just until her parents figured things out?

The two families worked with MCFD to figure out the details, and soon the little girl, who has what Janice calls “the full meal deal” of special needs (including FASD, ADHD, and visual learning disabilities), moved in as a restricted foster care placement. “[MCFD] basically dropped her off at our door, and she never left,” says Janice. The Bergs officially adopted her–their tenth child. From that point on, says Jan, “We basically just went back to our faith. If God has more children for us, should that be the plan, then He’ll provide.”

That provision came in the form a six-year-old boy and his five-year-old sister. Both have suspected FASD and were prenatally exposed to drugs. The little girl also has autism. She only knew two words when she moved in, “Mom” and “no,” but soon learned enough language to disclose abuse. “Her little brother just took off and ran when she started to talk, afraid he would be in so much trouble [for telling],” says Jan.

Their thirteenth and fourteenth children brought life full circle in more ways than one. Last April, the Bergs and one of their sons were visiting family in Arkansas. Because their adoptions are open, contact and visits with their children’s many biological and foster family members are part of daily life. This visit was a little different, though. Their son’s sister, pregnant with her fifth child and struggling immensely, asked Janice and Don to adopt her four-year-old twins. How could they say no?

After some scrambling, and plenty of legal advice, the preschoolers came home with the family to Abbotsford. A year later, the family is dealing with the effects of sexual abuse, neglect, and severe attachment challenges. Janice doesn’t shy away from admitting that things are very hard. But, as always, the family’s love and commitment is unwavering. They hope to complete the adoptions of the twins – their thirteenth and fourteenth children – later this year.

All about the love

So, is the Berg family finally complete? “I never know,” laughs Janice. Sometimes people ask if she adopted her kids “for the money.” What money? Janice and Don would like to know! They budget carefully, do everything as a family (she and Don rarely go out alone together), and live simply on Don’s income. Others ask if she’s competing for 19 Kids and Counting, an American reality show that spotlights the Duggar family and their 19 biological children.

Janice laughs off those comments. “[Money and fame] are the furthest thing from our lives and our hearts,” she says. She views parenting as her calling and her profession. Most people would say Janice is a stay-at-home mom, but there isn’t much staying at home involved. “If you see what I go through in the day, you’d know this is not a walk in the park. Nine of my kids have special needs. I’m running through the school; I’m running to Children’s Hospital; I need to be available [at all times].”

It’s obviously not an easy job. What keeps her going? “I just love kids,” says Janice. “We both love kids. That’s what it all comes down to."

Further Reading:
Everyone has a story: Meet the Vaillancourts