Everyone has a story: Meet the Alexanders

Three years ago, Dave and Juanita Alexander found themselves halfway around the world with 18 suitcases, 12 carry-ons, a year’s worth of supplies and four children. Dave and Juanita, have collectively lived and worked in five countries (including Canada), and have four beautiful children through adoption. In 2012, they uprooted their lives to move to Uganda for a year. Since then, they have settled back into their daily lives in Langley and continue to enjoy new adventures together.

Juanita grew up in a family that fostered many children, something that she remembers fondly as a normal part of everyday life. Although infertility was part of their story, when she and Dave decided to adopt, it was never a second choice to them; rather, it was a just another natural way to grow their family.

Together, Juanita and Dave faced a multitude of challenges and adversities. Each new adoption brought a new roadblock, but they overcame them all with grace and unconditional love and faith in their family and their children. Throughout their entire journey, they always fought and advocated for their children and continue to do so to this day.

Is it going to happen, is it not? 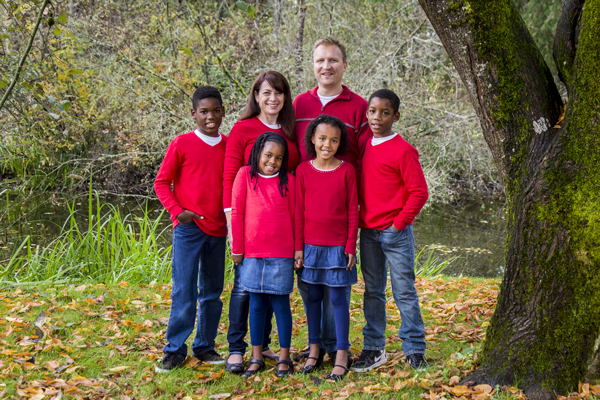 The Alexanders adopted their first two children, Elias, 12, and Keiran, 10 from the United States, through an agency called, An Open Door. They decided to adopt from the United States because they felt that program offered them a better chance of a relatively fast open infant adoption. Those first two adoptions did, in fact, happen quickly. They were matched with their sons within weeks of completing the application process. The third adoption of their youngest child Imani, 7, took much longer. The Hague convention was in the process of being implemented, and there was some confusion as to what it would mean for Canadians adopting from the U.S. At one point, Dave and Juanita even received a phone call telling them their file was being sent back and the program was being closed.

“That was devastating. I mean, we were just crushed,” Dave remembers, but he and Juanita weren’t ready to give up hope. They researched and discovered that because their adoption was already in process, it was still legal.
After talking with their agency’s CEO, their file was reopened and they received an updated fee schedule. Although they were surprised to find that adoption fees had increased dramatically, they managed to work things out and move forward.

A year after Imani came home, the Alexanders contacted the Ministry regarding the child-specific adoption of their fourth child and third eldest, Zania, 8, who was being fostered by close family friends of the Alexanders and whose adoption came with its own complications. “No adoption is straightforward. There is no such thing as normal adoption,” Dave says.

Zania’s adoption fell into place after much push and pull with social workers and further education. Dave and Juanita were able to finalize Imani’s adoption in Canada before they were granted permission to foster Zania, and finally officially adopt her. In a period of eight months, the Alexanders gained their two little girls. They knew their family was finally complete.

Opening up to openness

Dave and Juanita have always embraced openness in adoption, but that doesn’t mean everything has been smooth sailing. Technically, all of their adoptions are open, and all of the kids have met their birthmoms, but they’ve also faced their share of failed visits and other disappointments. Each child has a different amount of contact, however, which can create a difficult dynamic amongst the siblings. Zania’s adoption is the most open, because her mom lives locally and is able to visit more often. Zania’s birth dad lives in Tanzania, but when the family was in Uganda, he travelled to meet her. The other kids , whose birth family relationships are less open, have sometimes struggled with this. Honesty, open discussion, support and understanding are the keys to how Dave and Juanita help their children cope.

The Alexander kids have grown up immersed in adoption, and talking about adoption has always been normal for them. Juanita remembers her ‘age appropriate explanation’: “You grew in your birthmom’s tummy and birthdads help to make babies.” With this profound understanding comes the ability for the kids to choose what and how much to share about their adoption story, based on their own individual comfort level. Some of the kids feel fine sharing and others don’t, and their parents encourage them to recognize and respect those choices.

Beyond black and white

Being a transracial family is just as normal to them as adoption is. They realize, however, that questions from the rest of the world will always be inevitable. Their trip to Uganda was designed to allow the kids to experience the world from a new perspective: one where they were not in the minority because of the colour of their skin. When they landed in Uganda, Keiran turned to Juanita and said, ‘‘Mom, there’s way more brown people here.”

‘‘Buddy,” she replied, ‘‘that’s part of why we’re here.” Dave and Juanita also saw the trip as an opportunity to prepare their kids to navigate life’s inevitable moves and changes. Because a couple of their kids struggle with anxiety, they wanted to provide them with a safe, supportive context in which to learn that they could move to a new place, join a new school, find new friends, and make it work. Dave and Juanita had already lived and worked as teachers in Senegal, so they had a comfort level with Uganda that helped put the kids at ease with the dramatic change.

While in Uganda, the family created new traditions, made friends, and kept up a blog to share their journey with friends and family back home. Back, in Canada the boys still put out their Ugandan yearbooks and the girls reminisce about their weekends at Speke, a Ugandan resort, or the time they went on a safari. They use Lugandan phrases in everyday conversation, and have clothes and toys from the local Ugandan markets.

Dave and Juanita knew that the trip would be life-changing and that the kids would return home with a completely different lens. Their oldest son, in particular, found it hard to come back to everything being the same as it was before because he knew a different world now. ‘‘That one year continues to impact our lives in many different ways,” Juanita says.

Now the family is back home and thriving in Langley. There are still challenges, and learning to cope with the kids’ varying levels of anxiety has become the norm, but their journey is one full of love, trust, honesty and patience. How do they manage it? They put their kids first. “Love is not enough,” Juanita says, “You have to be willing to blow the lid off the box. I am having conversations and advocating for my kids in ways that I never anticipated I would ever have to, and that’s all okay”. They also know that they need to give their children more stability and down time than others, and that’s also something they’ve come to embrace.

“Normal is a setting on a dryer,” Dave adds. “There is no normal.”