Everyone has a story: Meet the Imries | Adoptive Families Association of BC

Everyone has a story: Meet the Imries 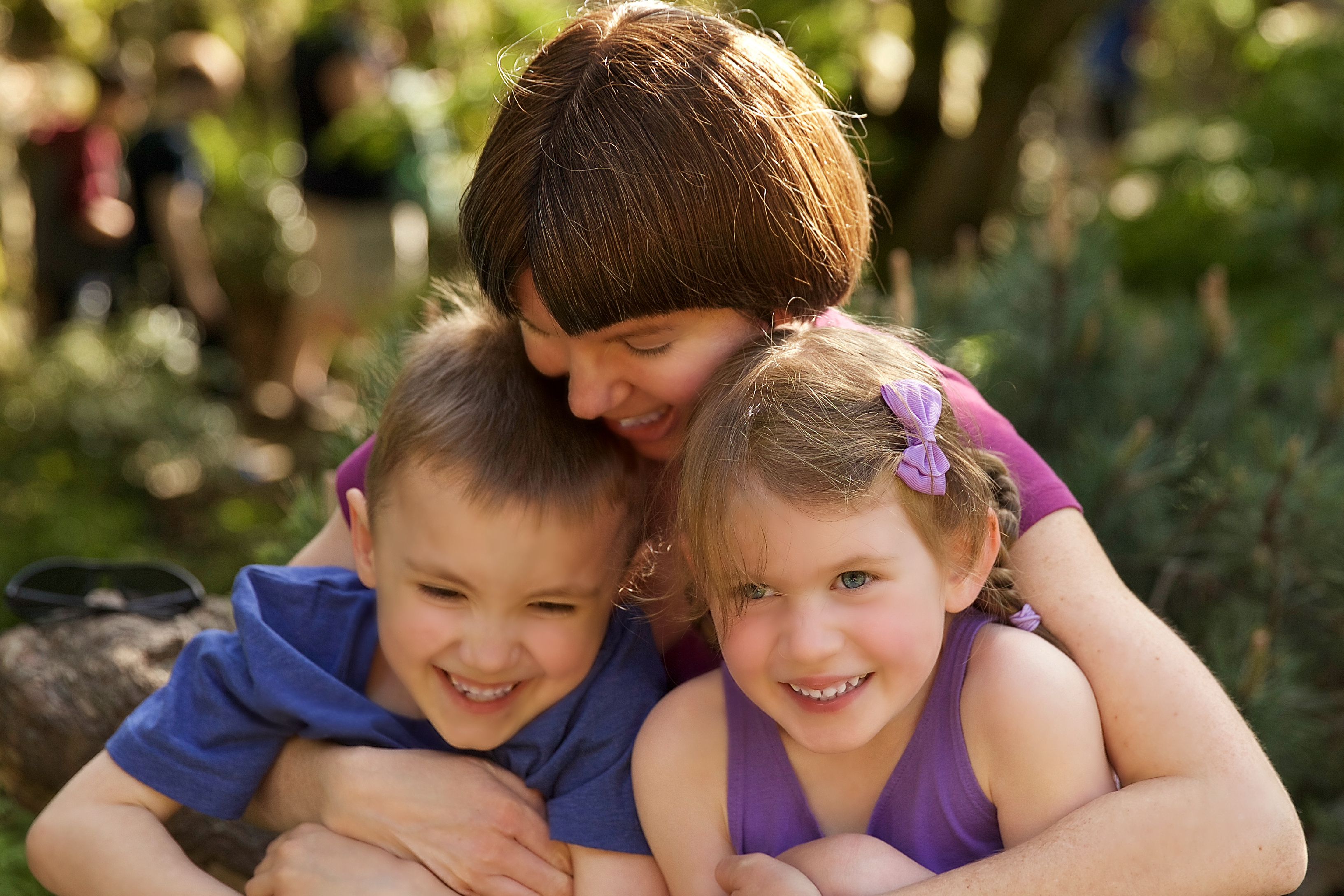 Meet the Imrie family: Jody, a special education teacher and foster-turned-adoptive mom who lives in Vancouver; her daughter, Kristina (6); and her son, Krillen (7).

How did you get started as a foster parent?

From the time I was a teenager, I always knew I wanted to adopt children.  I just always felt that there were so many children in the world who needed a home, and I wanted to give one to some of them rather than bring more children into the world.  I didn’t feel a need for my children to be biologically related to me.
I taught full-time for seven years, and then decided that I would be able to make more of a difference by parenting children rather than just teaching them.  I completed my home study and training to become a Safe Babies foster parent because homes for babies were needed the most at the time. When I was placed with my first baby in 2005, I started teaching part-time.

I’ve now fostered six children for extended periods of time, and several more for short periods.  Almost all of my foster children were placed with me as babies, and almost all of them were prenatally exposed to drugs and alcohol.

How do you manage the logistics of being a single, working foster and adoptive parent?

All of a sudden, as soon as my first baby was placed in my arms, teaching—which used to be my whole life—was not my priority anymore. Every part of me was focused on loving, caring for, and teaching this new little being. My mom and sisters live nearby, and they all took the Safe Babies training, too, so that they could care for my baby while I taught. My family has always been supportive of my decisions, and accepted my foster and adopted children as members of the family. Between my sisters and I, we have nine children ages 8 and under.  It’s been wonderful watching them all grow up together. My kids’ cousins are their best friends.

How did you go from fostering to adoption?

After fostering babies for 3 1/2 years, I decided that I was ready to adopt a child.  I loved fostering babies more than anything I had ever done in my life, but letting go of them (when they returned to their birth families or were adopted) was the hardest thing I ever had to do. I cared for one very special little boy from birth to 2 1/2 years, and I felt completely broken when he left to be adopted by his extended birth family. I felt like a part of me died when he left. I almost decided not to continue fostering, but then decided I would foster for short-term placements, as well as apply to adopt a child.

At the end of 2008, I was placed with a baby boy for what was supposed to be a couple of weeks. A few weeks later, I started the adoption education program, and then my adoption home study.  My foster baby, Krillen, kept staying and staying. I also continued with the adoption process. I was very open to almost all types of special needs, but I really did want to adopt a baby. I was told that was highly unlikely. However, about a year after I started the process, my social worker told me about a four-month-old baby girl. The baby’s grandmother was involved in choosing a family, and she and the baby’s social worker chose me! Kristina (Krissie) came home when she was five months old.

Around that same time, when Krillen was 15 months old, I was asked if I was interested in fostering him on a long-term basis, until age 19, I said yes. All of a sudden, I had two babies. It was almost like having twins. I was so happy.

The next few years were really stressful, because of the uncertainty of whether Krillen would actually stay with me. I was told adoption wasn’t an option because he’s Aboriginal (Tsimshian and Cree) and I’m not. Several different family members tried to get custody, but it was always decided that they were not healthy enough to care for a child, especially a child with special needs. It was such a relief when the Continuing Custody Order (CCO) was granted, because now his needs came first.  However, I was still told that I would not ever be able to adopt him

At age four, though, Krillen started asking about adoption. “What is adoption? Am I adopted? When are you going to adopt me?” He knew the word because of Krissie’s adoption. There were some social workers who truly believed in our family amd who listened when I told them all of the reasons Krillen needed and wanted to stay with me.

Krillen’s adoption was a huge, exhausting effort. People in the community who knew him—doctors, therapists, teachers, aboriginal workers—wrote letters of support. His birth family and his maternal band (Kitsumkalum) also eventually gave us their approval. I worked with a family therapist to write a book to help Krillen understand his story, the difference between foster care and adoption, all of the different people in his life (birth family, foster family, social workers, etc.), and our journey towards adoption. I wrote that sometimes adoptions are fast, and sometimes they are slow, but that we would get there together.

Finally, he was transferred to the MCFD adoption team. What a happy, full-of-relief day! After that, it took another year of hard work to prepare the cultural safety agreement for the Aboriginal Exceptions Committee. We even visited Saskatchewan to ask a member of his paternal band (Kawacatoose) to sign the cultural safety agreement in person. When the Exceptions Committee finally gave their conditional approval, we were able to set a date for his official placement.

Krillen was placed with me at 8 days old, and he was 7 years old when the adoption order was finally granted. I absolutely understand and respect the reasons for the long process, but nevertheless it was difficult, stressful, and exhausting.

How does your son’s Aboriginal heritage impact your life as a family?

I consider our family to be Aboriginal (as well as Scottish, English, German, and Welsh), because Krillen is a member of our family. From a young age, he felt a strong connection to his culture and was very proud of it. He knows that he is from the Tsimshian Nation, the Kitsumkalum band, and the Eagle clan. He decorated his room with Northwest Coast First Nations art and totem poles, we have many aboriginal children’s books, we attend events such as pow wows and dance festivals, and we seek out people in the aboriginal community to connect with and learn from. I’m trying to secure support at school for him from an Aboriginal Education Enhancement Worker.  We visited his paternal band in Saskatchewan and we will visit the Kitsumkalum band in Terrace in the next couple of years. Every night, Krillen and I discuss whether he was a “true Eagle” that day: brave, strong, and a good friend.

Are your adoptions open?

Yes, I have an openness agreement with my son’s two grandmothers and my daughter’s maternal grandmother.  We see one of Krillen’s grandmas a few times a year in a supervised setting, and we go on outings in the community with another grandma every month or two.

With my Krissie’s grandma, one of the reasons she chose me to adopt her granddaughter was because, after meeting me, she knew that I would agree to an open relationship and frequent visits. I ended up signing an agreement promising a visit every two weeks.  She is a lovely person and I have kept my promise for more than six years, but now that the kids are older and in school, it is hard to squeeze all the visits in.  However, it would devastate her to reduce the visits, so I make sure that they fit into my kids’ routines, interests, and schedules. I try to keep everything positive and fun for my kids.  I know it’s important for them to know their birth families.
We also stay in touch with some of my former foster children’s families, especially the boy that I fostered for two and a half years, who’s now 10. I promised him that I would always love him and stay in touch, and so even though his family moved to Regina, I fly out and visit him every summer.

Do your kids have special placement needs?

Both of my children were prenatally exposed to drugs and alcohol, and have many challenges as a result. Parenting them can be challenging, and sometimes it’s tiring to face very similar behaviour and learning issues at both work and home. At the same time, I find it so helpful being a special education teacher in the same district because I know the process, know the right questions to ask, and know some of the support people.

My son has great difficulty with emotional self-regulation, and I have to constantly remind myself to be as understanding and patient with him as I am with my students at school, and to use the strategies that I know work best. I use visual supports, consistent routines, clear communication, social stories, and lots of positive reinforcement.

My children may need extra help in some areas, but they are also affectionate, kind, curious, bright, and so funny! They are the best kids in the world. I love them more than anything on earth, and I know that I am so lucky to be their mommy.

What were some high points in your journey?

When my adoption worker called to tell me that I had been chosen to adopt my daughter. It was a tearful, amazing, unbelievable, oh-so-happy moment. And then meeting her for the first time, and knowing right away that she truly was the baby girl I was meant to love and care for forever.

When Krillen and I finally signed his adoption placement papers on June 1, 2015.  He practiced writing his full name all week long, and then I picked him up early from school and we went to our social worker’s office to sign the papers. It was so exciting! Then we went to the Lego Store and out for dinner, just the two of us. The next day, our whole family gathered at my parents’ house to celebrate. Each grandchild has their own special rose bush in my parents’ front garden, and Krillen was finally able to plant his. That weekend, we took the Rocky Mountaineer (he has always loved trains) up to Whistler and splurged on a fancy hotel. When we returned, I started four months of adoption leave.

At the end of 2015, my kids both filled out a “Time Capsule” worksheet, about their favourite things and best memories of the year.  For his highlight of the year, Krillen wrote “Mommy adopting me!!!!!!!!!” That sure made all the hard work worth it!

What advice would you give other families?

Communicate openly with your children from the very beginning about their adoption, so that adoption language becomes a normal, everyday part of their lives. Socialize with other families who have adopted children, so that your kids are not the only ones they know who are adopted. Make your children a book about their adoption story, with photos, memories, and a narrative of how everything happened, and celebrate special days together. My kids each look forward to their “Gotcha Day” all year!