Remember that rhyme you learned as a child? “Sticks and stones will break my bones, but words will never hurt me.” Obviously words can’t cause physical harm, but I’ve learned they definitely can cause emotional pain, the kind you hold in your heart and wear on your sleeve. The kind that leaves scars that never really go away.

I’ve heard that the most impressionable stage of life is during grade school. I think that the combination of extreme vulnerability and acquiescence is what makes this true. It’s especially true in children like me, who have been through, or are in, the care system.

When I was six years old my parents told me I was adopted. I had been watching an after-school TV special where an unkempt dad raced his labouring wife to the hospital. I remember asking, wide-eyed, if that was what my dad did when I was in my mom’s tummy. Cue the large elephant in the room.

“No, that’s not actually what happened,” my dad said. “Our family came together in a different way.” I learned I was adopted, and I was okay with it. Adoption was normal in my family. I had adopted friends, friends whose families fostered, and adopted cousins. I didn’t know anything different. Heck, even my dog was adopted. It wasn’t like a giant white bird dropped me off or anything outrageous like that. I was born to someone who made the best decision for us--for me and her--and my parents came and picked me up nine days later. That was my normal.

There were four notable moments in my life that taught me a lot. The thing about these little altercations is that, despite the time that has passed, they still haunt me. I now think that if proper awareness and education had been available, these events could’ve been avoided. 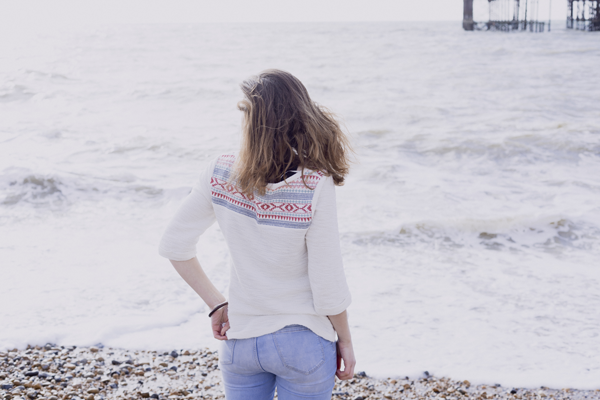 The first moment was in Grade 1. I was always the child who couldn’t wait to go to school. I once cried in my closet for 45 minutes because my mom wouldn’t let me go to school sick. I was excited to see my friends, meet my teacher, learn new things, and to tell everyone how proud I was to be adopted! I didn’t think anything of it, and neither did my friends. It was "my normal”, my teacher told my parents about my announcement, though, and my parents let me know that my adopted status was a ”need to know” matter. Unfortunately, my tragic flaw is being overly trusting, and I continued to share my adoption story openly.

The second moment was in Grade 7 during a scuffle over something silly, like who was supposed to clean the chalkboard that week. I had the upper hand because even at that young age, my rapier wit and sarcasm were my best qualities. My adversary was a 12-year-old boy who simply said the first thing about me that came to mind: “Well your own parents didn’t even love you.” That was the first time he said it, the first time the other kids heard it, and the first time I understood adoption in that light. It wasn’t, however, the last time. The first thing a bully seeks out is your weakness and sensitivity--adoption was mine.

The third moment took place in Grade 11, a time when I was ruled by my emotions, especially my teenage angst. I still suffered from the fatal flaw of being too trusting and had developed a boundless, naive optimism. I hadn’t told as many people about my adoption as I had in elementary school because I had come to know that “the looks” and commentary could spread like wildfire. Subtle bullying is probably the worst because it usually comes from your friends or the people you are closest to. My friends would make adoption jokes or insensitive comments on my family’s appearance or my own appearance; but because they were my friends, I tried to let it go.

Bullying, as outlined by BC Ministry of Education (BCED), are actions that are repeated over time, intended to hurt, and involve a power imbalance. Bullying can occur by means of physical, verbal or social aggression. When my friend group--my second ”family”--fell apart, the bullying was no longer subtle. The once joking comments became sneers in the hallway and whispers at the lunch table. One day I received an anonymous message from a mobile app that said awful things about me and my adoption. After that, I completely stopped telling people about it.

The fourth moment happened recently. After I was bullied in Grade 11, I dealt with my adoption by pushing it aside and pretending it didn’t exist. It wasn’t something I was proud of anymore. Instead, my adoption was a nuisance and a bother and something that marked me as different and abnormal.

Recently, though, since connecting with AFABC, adoption has again become something I admire immensely. Through research, reading, learning about the foster care system and hearing other people’s stories, I’ve come to appreciate the benefits of talking about adoption and being comfortable with it in a new way.

This doesn’t mean I can forget the cruel things people have said to me or the way their words crawled under my skin. I still have to live with those experiences, but now I can use what I’ve learned to advocate for other children and help them come to terms with their own stories.

Now that I can look back on these pivotal moments as an adult, I know that the 12-year-old boy who lashed out at me had no intention of causing real harm. He didn’t have enough education and understanding to know what his statement would do to me. I see this now when I share my stories with other adoptees or with children in care. Something as simple as a family tree or a school assignment for Mother’s Day can bring up questions and emotions that catch kids off guard. We need to use education and awareness to create a safe and sensitive environment in which all children can learn and thrive.

For parents, it’s important to build your child up from the start. If they are comfortable with the idea of adoption, and with their own adoption story, then it becomes easier to remember that they are important and that bullies don’t have power over them or their story. It can also give them the strength and perspective to understand that a bully might be lashing out because they don’t really understand adoption.

Teaching your child to logically and rationally work through these conflicts can be a very effective way to prevent further bullying from occurring. Parents should also create good relationships with their child’s school and suggest alternatives to projects that might trigger negative responses.

For children, it’s important to understand that bullies want reactions. If you can understand that, you can separate yourself and your story from the situation. It’s important to be confident in who you are, and to remind yourself that you are more than the words a bully might say. Speaking up isn’t bad. If something that your friends are constantly saying or doing is bothering you, you should tell them. They may not realize their comments hurt you. And if they don’t stop, then you can decide whether you really want them to be involved in your life.

Last but not least, seek help. If you are being hurt, please reach out to someone for support. See the sidebar on this page for resources you can access. You are not alone!

One other way parents and teachers can help is by talking to children about what different families look like. According to a Statistics Canada census from 2011, nuclear families are declining while complex, diverse families are increasing. However, there’s still a pervasive lack of understanding in our society about alternative family structures and young children are naturally curious. It’s important to prepare your children to receive and understand the inquiries and comments of other kids. Often, adopted children may not be thinking about or questioning their “adoptedness,” so when a curious child asks a question, they might be caught off guard. Being bullied as a child is not a pleasant experience. But it is an experience. One that I have grown and learned from. It has become part of my story, and that is the last and final piece to take from this. Being bullied was an experience that I had, but it does not reflect me or who I am. I was hurt, I learned and I grew, and that was a blessing in disguise.

Rachel Carrier is concurrently working at AFABC and finishing her undergraduate degree at Simon Fraser University in English and Communications. She lives in Maple Ridge with her family.