An adoptee's advice | Adoptive Families Association of BC

Back in the early 1970’s, there wasn’t much support for adoptive parents. My adopted brother and I were raised just like my sister, my parent’s only biological child.

It didn’t matter that we all had different birth parents. We were three peas in a single pod. That was the story, and I  believed it, because I believed in my mother. She did the best she could with the resources that were available to her. I didn’t think I was different because I was adopted. Yet, my mom was sometimes confused by my behaviour  and I was confused by her reactions.

Fast forward to a year ago, in the spring of 2013, when I started working at the Adoptive Families Association of BC. My one-dimensional understanding of myself as an adoptee blossomed like a lotus in the morning light as the world of adoption opened up for me. I began to soak up knowledge, and I started to understand some of those confusing experiences in a new way. 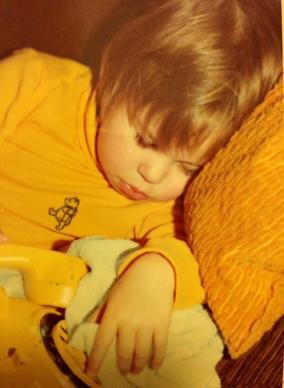 Too old for a blanky?

As the education coordinator, I get to moderate webinars. Although you can’t see me, I’m sitting in the library with my headset on, listening intently, nodding my head and occasionally wiping a tear from my eye. The “Aha!” moments often hit me by surprise. During Anne Melcombe’s presentation on Transitioning Children into  Adoption, she advises new adoptive parents to let their child keep the toys that they have been given.

Hearing this evoked the memory of my mom and I standing in our kitchen for the throwing-the-blanky-away  ceremony. It was time. I was growing up. True to my mom’s form, it was a rather stern, matter-of-fact moment.  Yet, instead of growing up, I shut down. Then, after what seemed like an eternity, she gave my precious blanky back to me, and my inner light came back on.

Adoptive parents, please learn about attachment! Things like toys, blankies, or pets may not have great meaning to you, but to your adopted child, it could be the only safe constant they have. Think of this: my parents are long gone, but I still have shreds of my blanky.

Is it lying... or confabulation?

I always thought I was pretty normal until my mom once, rather casually, said that she thought I was “a little  retarded.” Her words stunned me, and even she clarified, “You always answer people’s questions in a way that is sure to please them, even when it’s impossible for you to actually know what you are talking about.” What might have been a casual chat to her has left me spending much of my life wondering, “Am I really retarded?”

While waiting for my job interview in the AFABC reception area, I picked up a copy of Focus on Adoption and read an article about confabulation. “Confabulation is the replacement of a gap in a person’s memory with false  information that he solidly and consistently believes to be true… the information they give may be quite  fantastical and impossible but, nonetheless, completely believable to them.”

I was finally able to conclude that while I may not necessarily be the r-word, I have on occasion confabulated. I  never intended to deceive; I did what I could because I desperately needed to belong. Adoptive parents, please learn about rejection, abandonment, and the need to belong. Your adopted kids may respond to situations in unusual ways. Before reprimanding them, consider the larger context and try to understand where they are  coming from.

The last and perhaps most significant connection I’ve had in my learning at AFABC is that adopted kids can have anger issues. Following a Twitter link one day to an adoptee’s blog, I read about a woman’s experience with anger and rage. I felt like standing up and shouting “Hurray!” for after four decades of battling red-hot crying spells and people telling me that I need to deal with my anger, I finally understood that a) I was not alone and b) this has probably has something to do with being adopted. Adoptive parents, please don’t tell your kids to deal with their anger issues; instead, find and share the tools your kids will need to manage anger.

Erin Melvin is the Education Coordinator at AFABC. After many years of traveling and searching for meaning, she realised she was looking for an understanding of where she came from and what it means to be adopted. She’s keen to keep learning and helping adoptive parents build stronger families.

Read more by subscribing to Focus on Adoption magazine!