Adoption in Islam | Adoptive Families Association of BC

Like any newly married young couple, we (Nazima and Riyad) loved to dream about the next stages our life together. We enjoyed the strong
family-oriented upbringings we both experienced, and knew we wanted to have kids ourselves early in our marriage. Unfortunately, within the first year of our lives together, Nazima was diagnosed with advanced stage endometriosis. The doctors told us the difficult news that would be next to impossible for us to have biological children. We tried multiple fertility treatments, but they all failed. When Nazima had to undergo an emergency hysterectomy, making a pregnancy truly impossible, we were devasted. What we didn’t know was that the boy who would become our adoptive son would be born just a few short months after that life-altering surgery.

Our adoption journey actually began while we were still undergoing infertility treatments. Nazima was the one who brought it up; it took Riyad some time to come around. After the hysterectomy, however, we both realized that our dream of becoming parents hadn’t ended. Instead, it was leading us down a different path—one that, as Muslims, would draw us closer to each other and to our faith.

The religion of Islam includes a rich tradition of fostering and adoption. The Prophet Muhammad himself was raised by his grandfather and his paternal uncle after he was orphaned as a young child. Later, he became an adoptive father himself.

The theme of adoption is often mentioned in the Quran and in the Prophetic Sayings (Islam’s sacred texts). The stories of Moses and of Mary, mother of Jesus are two examples. Mary’s mother pledged to give her child into the service of God, and placed her in the care of her uncle Zechariah, who was the Priest of the temple. Moses’ birth mother placed him in a basket in the river Nile to escape the punishment of the Pharaoh; he was rescued by the Pharoah’s wife, and was raised by her in the royal palace.

There are also numerous verses in the Quran that describe the spiritual benefits of caring for the orphan child, as well as prophetic sayings which exalt those who care for orphans. In one story, the Prophet says that whoever takes care of an orphan will be side by side with him in Paradise. These religious instructions have resulted in a long history of Muslims striving to care for children in need through fostering, adoption, or financial support.

After the Prophet’s adoption of his son, adoption is replaced in the Quran with the concept of kafalah. Kafalah emphasizes fostering children in need of care but forbids claming adoptive children as blood relatives. Because of this, adoption presents some unique challenges
for Muslims who wish to comply with Islamic Law. For example, Islamic inheritance law only permits blood relatives to holds rights to an estate. The only way for adopted children to receive an inheritance is if it’s given to them as a gift.

Islam also maintains that every child should have a legal connection to their birth family and that adoptive families shouldn’t claim the child as part of their lineage, either through explicit statements or through naming of the child after the adoptive father.

Although they may initially seem negative, these religious rulings essentially emphasizes the right of their child to know about their birth family—a very contemporary perspective, and one that we appreciate. 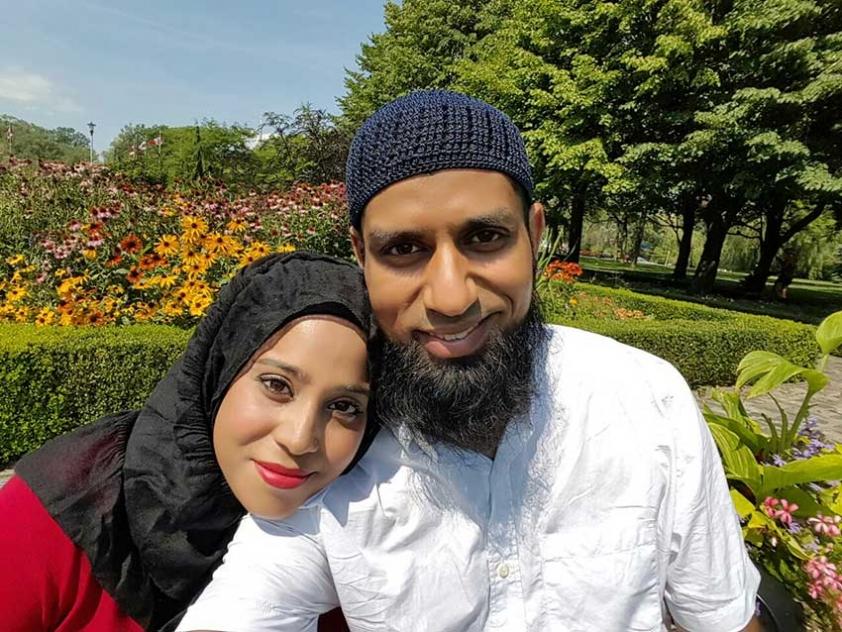 Adoption wasn’t something anyone in our family or circle of friends had experienced, so navigating our way through the process was very confusing and stressful at first. After some research, we decided to apply to adopt from South Africa. We were both still young and wanted to experience the joys of raising a child from infancy, and the South Africa program sounded like the most promising option at the time. We enrolled in Ontario’s required Parent Resources for Information, Development and Education (PRIDE) course and registered with an agency that handled international adoptions.

During our PRIDE training we met many families who were in different stages of their adoption journey. It felt great to finally connect with people who had experienced or were experiencing many of the same feelings and challenges as us.

We finally completed all the application requirements, and our file was sent to South Africa. As we anxiously waited for a match, we began to prepare our family and friends for our adoption. Luckily, our loved ones gave us great support and were as excited as we were to welcome a new addition to the family. In their excitement, they spread the word to their own friends.

As fate would have it, one of these friends knew the Children’s Aid Society of Toronto (CAS) was searching for potential Muslim adoptive families for foster children. The friend suggested we send our home study to CAS to see if we could be a match for a local adoption.

Shortly after sending in our file, we were asked to meet with the caseworker for a child in care who was available for adoption. At that meeting, we also met our son, who was 10 months old, for the first time. Less than three weeks later, he was placed with us permanently and instantly became the joy of our lives. Our excitement and exuberance can’t be put into words.

Our adoption journey didn’t end there, and many people find the next part of our story unbelievable. One and half years after our son’s placement, we received a call from our caseworker who told us to put our summer plans on hold. Our son had a biological toddler brother who had come into foster care and was available for adoption. Less than a month later, we had two beautiful boys in our household.

Before that could even sink in, we received yet another call from our caseworker. The boys’ birth mother was in the hospital giving birth to a baby girl who would also be placed for adoption. We were asked if we’d take her into our home too. Our immediate answer was a resounding yes!

We now live happily with our three kids, and we thank God each day for all the blessings that they bring. They are truly a gift and we hope to provide the best upbringing and life experiences for them that we possibly can. We continue to pray for their birth family, and we hope our children will grow up to appreciate the connection they have with both their birth and adoptive families.

In order to help remove the taboo of adoption and infertility that persists in the greater Muslim community, we decided to hold an introduction party at our local mosque after each adoption. We invited our Imam to speak to the guests about adoption in Islam. He was very helpful in dispelling some of the myths and misconceptions. Since then, multiple families from various backgrounds and family dynamics have approached us to learn more about fostering and adoption. We recently connected with a Muslim infertility support group called Amal Fertility. It’s encouraging to see that the Islamic tradition of fostering and adoption is strong among Muslims, both here in Canada and abroad.

Nazima and Riyad Khan are the proud parents of three children they adopted through the Children’s Aid Society of Toronto. Follow them on Twitter @MuslimAdoption.