Adult adoption: My journey | Adoptive Families Association of BC

A story of two unconventional adoptions

This is the story of an adoption that seemed like it would never happen, but that worked out almost miraculously in the end.

I was adopted twice. In the first year of my life my adoptive mother and I were united in an unconventional way. At the age of five, I was adopted by her and my first adoptive father. Sixteen years later, I was adopted again by my stepfather, who had become my primary father figure.

The adoption process in my adult years was unconventional as well. In fact, after nearly two years of attempts and a final, dramatic courtroom session, the results of our family’s adoption journey set a new precedent for adult adoptions in Canada.

From babysitter to mother

In 1979, as a way of celebrating the International Year of the Child, a special woman with a big heart and a passion for children set out to help a child in need. She posted an ad in the Buy & Sell, offering child care for a disadvantaged family. My biological mother came across the ad and jumped at the opportunity to receive help.

For over four years the woman cared for me, often for days at a time. My biological mother was in a bad place and knew deep down that she was unable to provide the care that I needed. As she watched the relationship between the woman and I evolve into a loving mother-daughter bond, she knew what she had to do.

The woman, who had always wanted to become a mother but was unable to do so naturally, had promised to take care of me whenever needed, and had loved me as her own. One day she planted the seed by offering to adopt me if ever my biological mother was unable to care for me long-term. My biological mother, with my best interest in mind, decided to give up custody, and the woman who found me by chance became my mother by choice.

My adoptive mother had married soon after we first met, and she and her husband legally added me to their family through private adoption. I lived with both of my adoptive parents until the age of six, when they divorced. While I lived full time with my mother, my adoptive father moved to another country and eventually remarried. As his new family grew, our relationship dwindled. We eventually lost touch during my teen years. Meanwhile, at the age of nine, my mother began a relationship with a wonderful man. 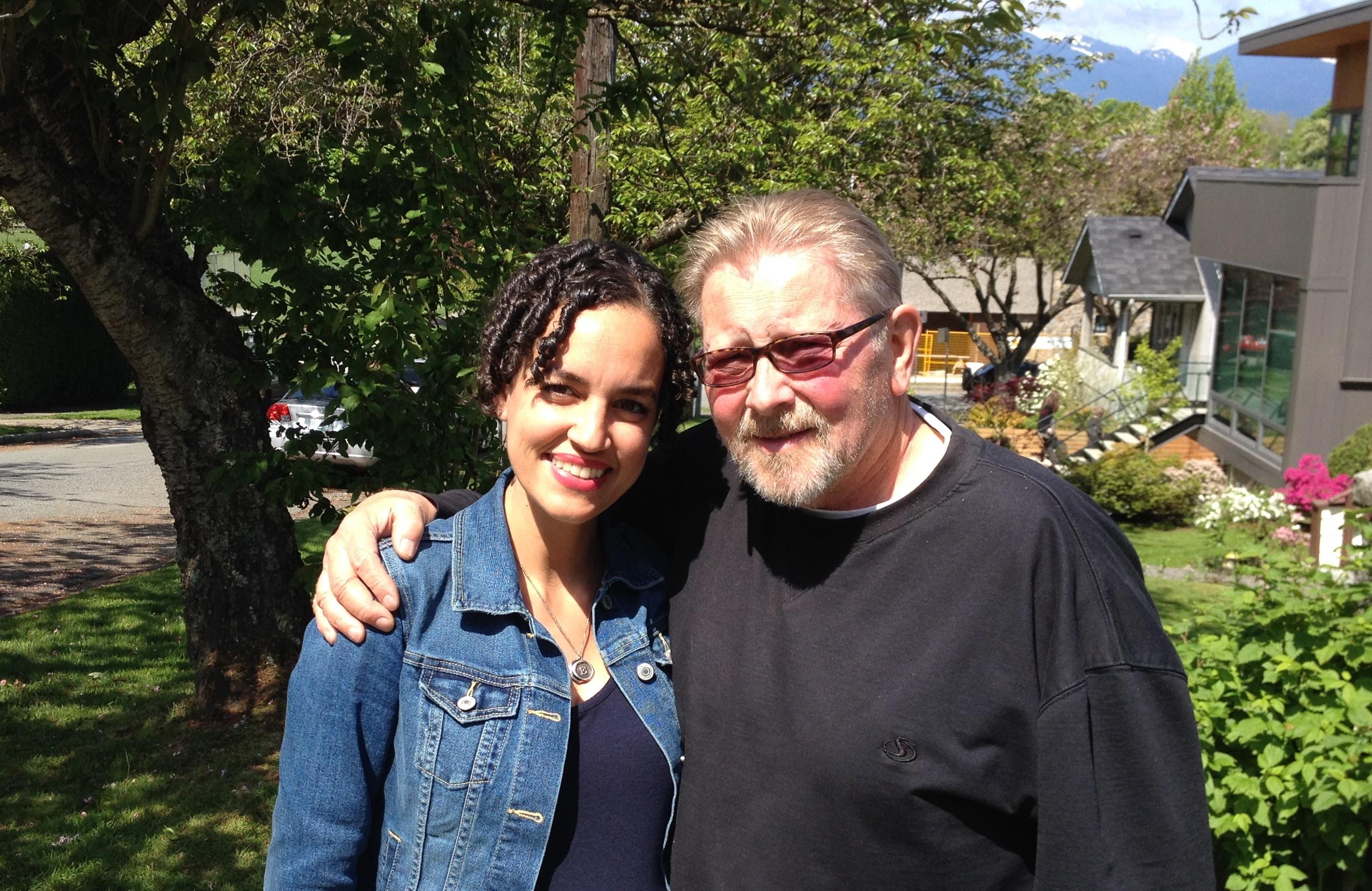 For most of my childhood and throughout my teen years, this man played the role of “father” in my life. Because he had two children from a previous marriage, he and my mother took their relationship very slowly. They married in an intimate ceremony in our home 10 years after they started dating. Afterwards, my mother and her new husband sat all three of us new stepsiblings down and told us we would have equal rights in our family. For my new stepfather, this meant that I was officially accepted in his heart as one of his own children. For me, though, it wasn’t enough to feel truly accepted as his daughter.

I had accepted him as my father figure, but I wanted to take on his family name as well. I wanted my university degree to display the last name that represented the father who had raised me. When I married, I wanted his surname to be recognized as my official maiden name. I wanted to share the same last name as my mother. To me, it was a symbol of our blended stepfamily becoming a true family unit.

My stepfather had made the decision to marry my mother as a way of legalizing their union (and ours), and I felt as though it was my turn to make a similar gesture with the same sentiment, but on my own accord.

At the age of 19, I decided that it was time to make our roles as father and daughter official. I wanted to present the idea to him through a sentimental gift: therefore, I purchased a small mahogany clock and had it engraved with the words, “It’s time you became my father.” I presented it to my stepfather and asked him if he would like to make his role as my father legal. He welcomed the idea with open arms, and we started what became an unexpectedly lengthy and almost impossible adoption process.

While we were sure of our decision to legalize our father-daughter relationship, we were unsure of how to start the official process of an adult adoption, so we sought out the legal advice of a lawyer and close family friend. Because I hadn’t maintained a relationship with my biological parents, and I had lost touch with my adopted father, we thought the process would be as simple as submitting a petition of consent signed by myself (as an independent adult), and my soon-to-be father. However, after some careful digging, our legal counsel found roadblocks in the system that would make our case nearly impossible.

The first was “permission from the natural parents of the person who is to be adopted,”* or, in my case, permission from my legal adopted father. This seemed like a reasonable request, as in most cases of adoption it would make sense for the legal parent to be required to give their permission to revoke their parental rights; however both my natural and adopted fathers were no longer present in my life.

If we were unable to provide signed consent from the biological or adoptive father, then we were required to meet the second form of consent noted in the adult adoption law: permission from the spouse of the person to be adopted.* I was unmarried at the time, and we thought this requirement was absurd and archaic. Why should a female adult need permission from a spouse to complete the adult adoption process?

My soon-to-be father had experience in the courtroom, both through his previous role on the parole board, and through acting as the legal representative for businesses he ran. He realized that we might be able to circumvent the formal legal barriers ourselves. Our attorney wisely suggested that his idea wouldn’t work, but she did agree to arrange for a hearing before a B.C. Supreme Court judge on our behalf.

In BC, adoption is a BC Supreme Court matter. Traditionally, appearing before a judge in a Supreme Court setting requires the presence of legal representation, but since the traditional legal process had not worked in our favour, we decided to represent ourselves. Our plan was to throw ourselves at the mercy of the judge and hope for the best.

As we anticipated our court date, we rehearsed our argument, aware of the challenges we would face by stepping into a courtroom without a lawyer by our side. When the time finally came to approach the bench, the judge started the session by asking in a stern voice, “Where is your lawyer?”

My father held his head high and responded with confidence, “My Lord, lawyers cannot help us any longer. We are here to appeal to you directly.”

The judge, looking perplexed by the fact that we would even attempt to appear before him without a lawyer, paused for a moment. We were waiting for him to ask us to leave his courtroom, but the stars lined up and he replied, “Tell me a little bit more.” At that point we knew that we had a chance.

My father proceeded to tell the judge about our journey, that the process had taken far too long, and that our only desire was to join together legally as father and daughter. As he started to address the challenges we had faced, the judge interrupted him and asked us two questions. He began by asking me, “Do you want this man to adopt you?”

I quickly responded, “Yes, my Lord.”

He then asked us, “Are the people who are interested in this adoption in  the courtroom today?” We looked at each other, and then looked at my mother who was watching on eagerly, and we replied, “Yes, my Lord.”

Caught up in the moment, my father continued with his explanation of the challenges we had faced. He hadn’t seen or heard the drop of the judge’s gavel.

The judge leaned forward and focused his eyes on my father, who was still speaking passionately about our journey. “Mr. Dueck,” he began in a loud voice. “Mr. Dueck! I have already granted your request.”

The courtroom, which was full of strangers waiting for their turn to be heard, exploded in applause. They cheered for our family and for the kindness that had been shown to us by the judge. My mother, father, and I burst into tears, thanked the judge, and left the courtroom overjoyed.

As we left the court house, the judge ran after us and stopped us in the hallway. We froze, sure that he had changed his mind. “I’m going to expedite the paperwork for you,” he said. “You’ve been through enough.” He brought the paperwork to the clerk himself to ensure that our adoption was processed immediately. As a result, a document that would have normally taken six weeks to process was delivered to us within days.

We had challenged the sexist, archaic laws around the adoption of an adult. As a result, our case has set a new precedent for Canadian law in the case of adult adoption, all thanks to one judge who chose to take a chance on a young woman and her desire to make her stepfather her father forever.

Bianca Bujan is an adoptee with a unique adoption story, and a mother of three. Through her blog, Bits of Bee (www.bitsofbee.com), she shares parenting advice, quotes and anecdotes as a career mom, intertwined with stories about adoption. By day, she works as a marketing consultant and content creator for her own business, Bee Communications (www.beecommunications.ca). In her spare time, Bianca loves to explore the outdoors with her family, taking photos and enjoying the sights of her beautiful city.