Another man's child | Adoptive Families Association of BC

Edmond Kilpatrick is the proud adoptive father of two daughters. As we approach Father’s Day, we’re pleased to share his thoughts on unconditional love and the meaning of family.

During our first adoption, my wife relayed a conversation she had with a gentleman at work. “I could never raise another man’s child,” he’d told her. I often think about the sentiment behind this phrase. To me, it questions some aspect of my manhood by suggesting my first priority should be to propagate my genes and perpetuate my bloodline, and that raising a child from a different birth father would threaten that.

When we received the first photo of a beautiful baby girl with a worried look in her eyes, I knew I’d be able to love her. We waited five long months until we could fly to Africa and meet her. The details I knew about her were brief, vague, and felt designed to avoid scaring me off. Still, in my heart I began to love her, or at least the idea of her, and I carried her photograph with me everywhere.

We finally arrived at the orphanage, where this little stranger was placed in our arms. I was thrilled, scared, awkward, disoriented, and beside myself with joy. It was hard to grasp that I was now the father of this baby, charged to raise her, love her, and guide her into a full life.

I was swimming in the emotions of a liminal space between my previous life, which had evaporated in an instant, and the new reality of being a dad. But never for a second did I think “this is another man’s child.” She was my child, and all my emotional faculties were working overtime to process that. Over the next two weeks, and every day since coming home, I’ve held this little girl who looks nothing like me, from a culture very little like my own, and become more and more devoted to her. 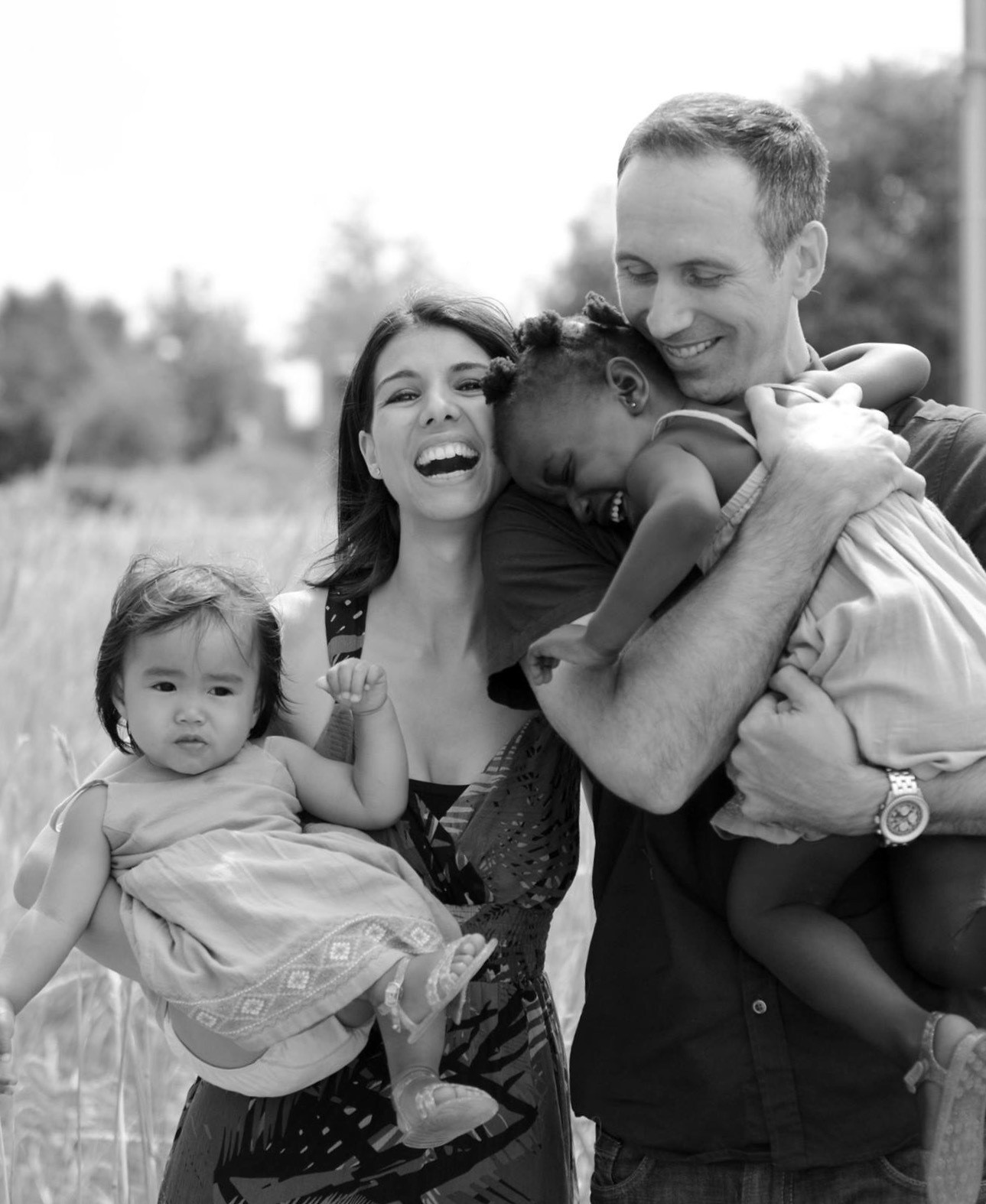 The second time around

When we decided to try to adopt a second child, I was more protective of myself, and made sure I didn’t get carried away by the emotional highs and lows of the process. When we met our second daughter in Vietnam it was another joyful, surreal, and awkward moment, but I wasn’t as emotionally swept away. Her transition to our family was more tumultuous than our first daughter’s and it took some time for us to attach to each other.

With this adoption, the initial flood of love and connection I felt in Africa was replaced by a slow, growing tide of trust and devotion. I read through her medical records and the documentation that was given us and tried to imagine her origins just as I had with my first daughter, but while I understand and accept she has a birth father, for some reason when I see my little girl I am not reminded of him.

The beauty of love

On our first morning together as a family of four, we opened the door to the restaurant of our Ho Chi Minh City hotel and the bustling chatter came to an abrupt halt. Silence hung in the air for an interminable moment while a room of people looked at us looking back at them. We became aware of what we looked like: two white North Americans with an African child and an Asian baby. The spectacle of our family hit us squarely in the jaw in that one seismic moment.

I know I look nothing like my girls. I’m very aware of their African and Asian heritage and of my responsibility to nurture their identities. Like any other parent, I also find myself staring at the features of my daughters’ faces. They are so beautiful to me. I can get lost in details like the line of their eyebrows or the curve of their cheeks, but I never see another man’s genes. I just see my girls. I have to admit this doesn’t seem normal. In fact, the sentiment behind that gentleman’s insistence that he “could never raise another man’s child” seems more understandable than my insistence that I don’t see another man’s genes when I look at my children.

Western anthropologists have historically understood kinship through the concepts of nature and law. The idea that families are formed through nature, or biological connectedness, gave rise to phrases like “born of my flesh” and “my own flesh and blood”. Laws, in turn, reflect how we think about inheritance, land, and wealth.

I remember an encounter that emphasized the strength of these concepts for me. I was in Africa, holding my new daughter in my arms, when a local gentleman around my age approached me and asked if this was my baby. He was surprised when I said yes, and asked if she would one day inherit my possessions. I suddenly saw my adoption through his eyes. For him, it seemed surprising that an African child adopted by a white North American would suddenly receive all my riches and lands, whereas I had always taken for granted that my children would inherit whatever I had to give them. 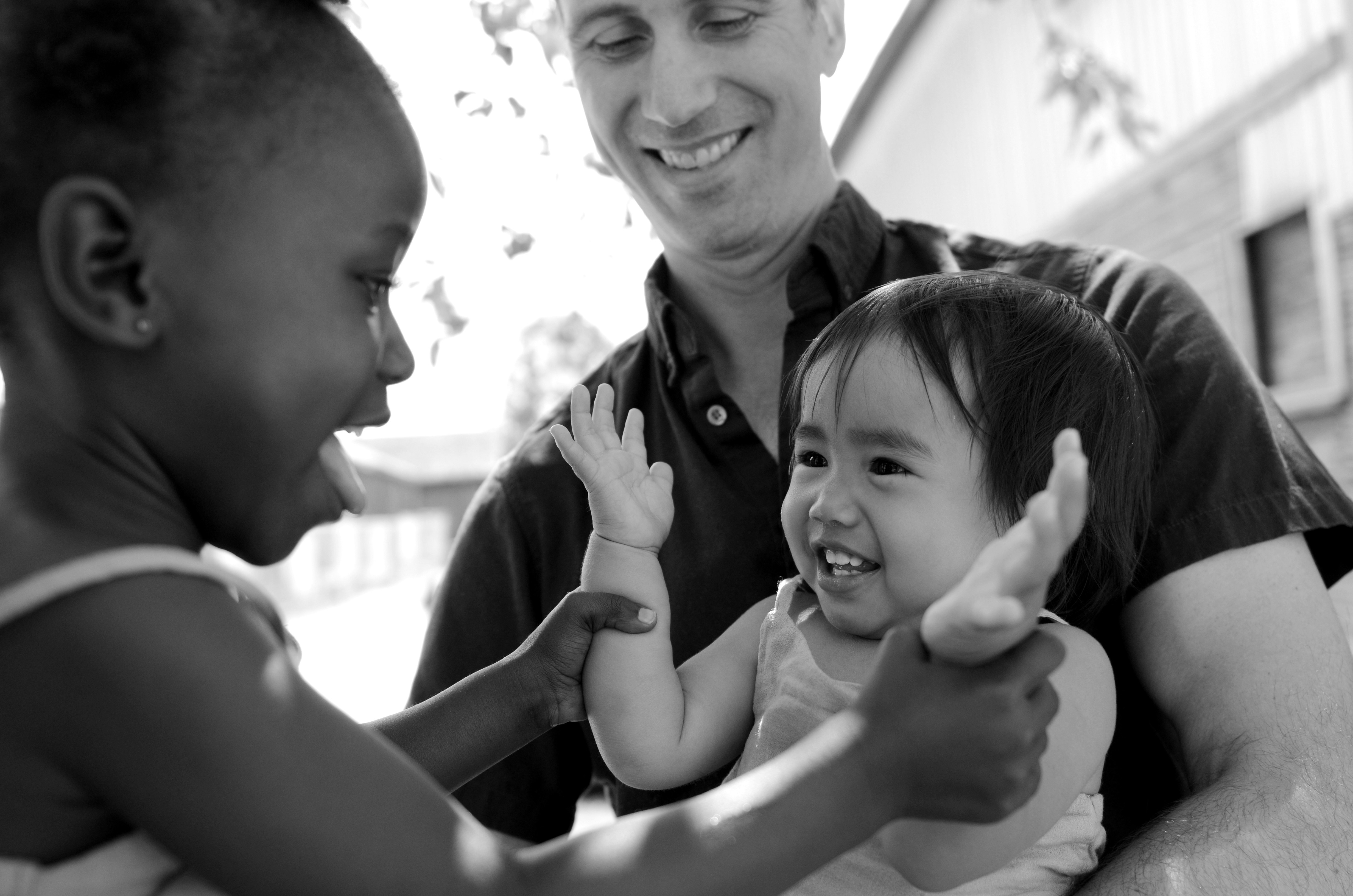 Nowadays, people are adopting for the emotional benefits of raising children and not necessarily to produce an heir or fulfill social expectations. Together, we are redefining the term kin. My daughters are very much my kin. They are my girls to love and provide for, just as if they’d been born biologically to me.

My family doesn’t conform to the idea that we must be connected by flesh and blood. I couldn’t tell you why I’m not concerned with perpetuating my genes, but I can tell you I chose to adopt because I knew I could love these girls. I suspect there are other men like myself out there that don’t relate to the sentiment, “I could never raise another man’s child.” Perhaps it doesn’t call us into question as men as much as it reveals the traditional values we have grown up with—values that we’re changing. ●