Bif Naked is a member of a lot of communities. Rock and roller, vegan, Canadian, animal lover, breast cancer survivor, humanitarian, adoptee, and author (her memoir, I, Bificus, came out in 2016 and is available from AFABC’s library). Yes, Bif Naked, also known as Beth, is an adoptee and proud of it.  In this article, she shares her story with Ronda Payne.

Adopted people sometimes talk about feeling like they’re part of a special, secret club made up of other adoptees. Knowing that their club includes famous people like Beth doesn’t necessarily change the way they feel about their own adoptions, but it does add a certain cachet. It also proves that adoptees can do anything that non-adoptees can do. Like becoming one of the first women in punk rock.

Beth’s singing career began at age 18 when a boyfriend (who later became her first husband) invited her to sing with a drum project called Jungle Milk. She then joined Winnipeg punk band Gorilla Gorilla, took on her moniker of Bif Naked, and moved to Vancouver with the band. Peter Karroll became her manager 20-plus years ago and helped launch the career that included songs like “Space Man” and “I Love Myself Today.”

Now, Beth is in a new band called Snake and the Chain, with her new husband Snake Allen.  I caught up with her not long after she’d moved to Toronto. She’d been a resident of Vancouver for 30 years and still thinks of the area as home.

“It was a massive culture shock,” she says of the move. “It’s just different. It’s
so different.”

Decades ago, Beth went through another massive transition, though she was too young to have it imprinted as memory. Her birth mother was a Canadian attending high school in New Dehli, India, when she became pregnant and gave birth. At that time, Beth’s adoptive parents were American missionaries in India. It was a complex scenario.

“I just think it probably, at that time, wasn’t very common,” she says. “To have a situation where you’ve got these American missionaries, adopting a Canadian baby in a foreign land. It could have been anywhere. It could have be Czechoslovakia. Things were just so different.”

Growing up, Beth’s adoption was an important element in her life.

“It was my entire identity. That, I would say, was due to my father,” she explains. “My dad was extremely gregarious and he would always introduce me as their Canuck. Because I was the only Canadian in my family, due to the fact that my birth mom was Canadian. And he always introduced me as ’this is Beth, our Canuck’.”

“My parents always stressed that [adoption] was something to be proud of. Always encouraged me if I ever wanted to find out more about my biological mother to let them know, that they would make sure that this could be realized. I was extremely proud of it [being adopted].” Although her father has passed away, Beth still describes herself as exceptionally close to both of her adoptive parents. 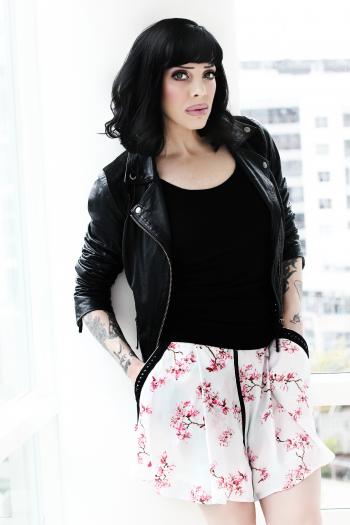 “Go and adopt a kid”

One of Beth’s sisters was also adopted in India; later, her parents had a biological daughter. Although her parents didn’t have fertility challenges, Beth has seen couples struggle with in vitro fertilization (IVF) for years without considering adoption.

“I’d like to make a suggestion–you know–go and adopt a kid. It’s such a great and wonderful thing. I think the best way that I can encourage people to explore adoption and to promote adoption and just really celebrate it, is by trying to be a happy and successful person. So that I make it look good. You know basically, that I’m a good representative.”

Which she is—­a great representative, actually. Beth has achieved enormous success in many areas of her life. She credits both her parents and her birth parents with her talent.

“Part of me thinks it’s partly genetics. I was definitely never shy a day in my entire life,” she notes. “And I think it made me a natural performer. I think my approval-seeking behaviors have more to do with basically my own personal anxieties and stress responses rather than being adopted. I think it was just how I was built. I felt like I had an upper hand in a way because I could kind of discern what was environmental and what was genetic as far as my preferences or habits, behaviours, things I’m interested in.”

Beth’s birth mom was something of a wild child in her family—a role Beth herself can appreciate. She describes her birth mom as having been adventurous and a risk taker. Her adoptive parents, by contrast, were interested in theology and were academics, activists, and advocates. Both these influences found their way into Beth’s life.

“I’ve been really lucky,” she says. “I feel all the adult role models in my life, I’ve always had a lot of respect for.”

The ups and downs of open adoption

At age 20, Beth’s parents flew her to Ontario to meet her birth mother for the first time. The flight was a birthday gift from Beth’ parents and it led to an ongoing relationship with her birth mom who, interestingly, is also an adoptee. By the time she met Beth, her birth mother had two more children whom she was parenting. She describes the relationship as being similar to having relatives who live in another city.

“I think I was in a unique position because of being on tour for 30 years,” she says. “I played in the Toronto area twice a year, so every time I came to town I saw them. That was something that really normalized it. It was always good.”

When asked if she would have liked to have had a more modern open relationship with her birth mom, where their relationship could have formed from Beth’s infancy, Beth says she would. She’s not sure if it would have changed anything about who she is or where she’s at in life, though.

“I think that it would have been fantastic, because I like her a lot and I enjoy spending time with her and talking with her and obviously I think, I wish, I would have had more of that,” she says. “If anyone has a chance to try and have a relationship with their biological family, and everyone wants to, then that’s fantastic.”

Her biological father expressed no interest in connecting with Beth when she reached out to him, primarily for medical reasons, in the mid-90s. “He wasn’t really into it all. I never contacted him ever, ever again,” she explains. “I don’t really grieve about my biological father not wanting any part of it. I just kind of feel bad for him.”

Beth says she’s still surprised by the success she’s achieved in her life and keeps working towards the next steps that make a difference.

“Every year, you are always striving,” she says. “And certainly now, music is not a real revenue source in any way. I guess there’s little milestones and it’s probably true for any career, little milestones that are very validating and keep you going.”

For her, there were certain things she felt she had to do in order to legitimize her career in others’ eyes. Sometimes the validation was for her and other times it was for others, like her parents.

“It makes me laugh now,” she says. “They got a real kick out of my job. My mom is probably my biggest fan. She’s just always been so supportive.”

With all that’s happened in her life, does Beth still feel that being an adoptee is an important part of who she is? Yes, 100%.

“I think because my parents basically always identified me as an adopted kid, it’s always been how I self-identify,” she notes. “What I discovered as I get older is the way I identified when I was young still remains. We all kind of hold true to who we think we are.”

Among all the things Beth/Bif Naked identifies with, being adopted is clearly one of the most important ones. The private club of adoptees, always a special place, is even more special because she’s part of it.

A writer since she first held a pen, Ronda Payne is passionate about words. She began her career as a copywriter, freelance writer, and creative writer and allowed her spirit loose. As an adoptee, she believes in giving other adoptees and adoption issues the voice they deserve. Find her at www.girlwithapen.ca.