For years, I tried to avoid even considering adoption. The idea of being put with people I didn’t know anything about and hadn’t even seen before was a little scary. I’d mostly lived with my great-grandma my whole life. That felt like home to me, and I didn’t want to leave. Unfortunately, my grandma’s age and health problems were getting bad and she wasn’t able to continue taking care of me. I had nowhere to turn. Adoption became the best option for me. Deciding on adoption was very scary, and I felt like I was risking my future. I didn’t know where I’d end up, who I’d be with, or how I’d be treated. But all I could do at that point was hope for the best.

I got a call one day from my social worker saying that she thought she might have found a good match for me. I was extremely nervous about that, but I went with it and agreed to do a phone interview. It went really well, so I agreed to meet with my prospective parents in person. I was excited and also nervous. I’d get to see what these people looked like and actually have some face to face interaction. 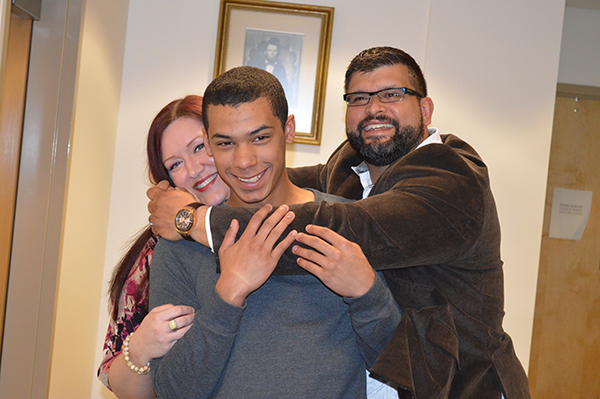 We hit it off very well. After we talked for about an hour, they took me to the fair. We went on a couple of rides and went to the petting zoo, and then to Red Lobster for dinner. I got to try lobster for the first time and to this day it’s still my favourite. I remember that as being one of the best memories I’ve had with them. We really got to know each other at dinner. They were easy to talk to, and I felt like I could trust them. After that we planned on me coming to stay a weekend with them to see how I would like it at their house. I was still nervous, but I did it anyway because I really liked them.

Once I got to their house, I was relieved. It wasn’t what I thought it would be like at all. It was a beautiful place. I actually felt very relaxed. When I went back, I honestly felt kind of sad because I was really happy there.

A week went by and I was asked if I would like to move in with them. I knew then that I wanted to go through with it. When I started living with them, it felt like I belonged there. By the time I was officially adopted, I had been living there for six months and I already felt like part of the family.

I’ve been able to relax and feel like a kid again since coming to live with my new family. I can think about my future, what my career is going to be, and what I want to do after high school. Some parts of adoption have been challenging for me. I’m so used to being the one in charge of myself, staying up as late as I want, and doing whatever I want. Now my parents have a say over all of these things. But that’s all part of learning to be a part of the family and listening to your new parents. They will treat you like their own, because that’s what you are – their son or daughter. It takes a lot of adjusting, but I think it’s 100% worth it.

Read Deon's parents journey in part one: Meet the Vaillancourts.