Chosen ones | Adoptive Families Association of BC

Decades ago, when my parents found out they couldn’t have children, adoption was less complex than it is now.

With more adoptable infants available in the region, they were able to have their “dream” family of one boy and one girl relatively quickly. My brother was adopted first in the mid 1960s, and I followed a little less than four years later. The application for my adoption included a photo of my dad, my mom, and my brother, Brent, in matching shirts hand-made by my mom. 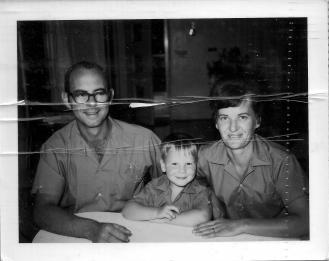 The concept of having two children seems logical enough now, as it did then, but some of my parents’ friends and family weren’t completely supportive of the idea when they found out I’d been chosen. Unlike the adoption of my brother, my arrival (when I was 10 days old) was kept a surprise.

“We have something we want to show you,” my dad told my grandfather, as though I were a new coffee table or  refrigerator.

Walking through the door and seeing the paraphernalia that came along with a baby, my grandfather figured it  out and said, “Why the heck would you want another one?”

But when he saw me, and witnessed my brother’s obvious delight in having a little sister, it all became clear. I was welcomed into the family with nothing but love.

It hasn’t always been that way between my brother and me. In those early days, he saw himself as my protector, playmate, and teacher. As time passed into the pre-teen years, roles changed, and my brother became a  tormentor, pest, and tease. This wasn’t different from any other sibling relationship, either adopted or biological.

In those younger years, our differences were shockingly apparent due to the need to differentiate ourselves, as well as our own personal needs to learn more about who we were. The nature versus nurture argument is an old one in our family, and swung strongly to nature when Brent and I were young. He excelled in math, numbers, and logic, while I was more interested in writing and reading voraciously. He often wanted to play games with me and I usually wanted to play independently or with school friends. 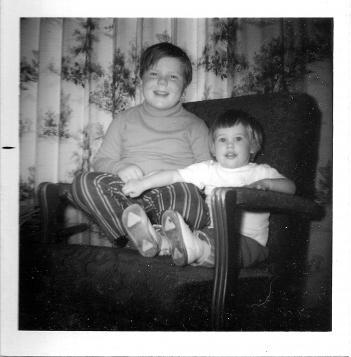 “Can’t you please play a game with your brother?” Mom pleaded to me more than once. “He’s bored.”

I was never bored. I didn’t understand her argument. I made friends easily and found amusement in a variety of pastimes. Brent found these things harder.

We competed at everything, from our school grades to Monopoly, even though our parents never praised one of us to the detriment of the other. It wasn’t the standard sibling rivalry, mind you, and never amounted to much beyond competition over who knew more about a given subject.

As childhood progressed into the teen years, it’s amazing my parents stayed sane. The impact of adding teenage hormones into sibling battles should not be underestimated.

Brent and I fought. A lot. More than most teen siblings, I think. While it had nothing to do with being adopted, I believe it had everything to do with the vast differences between our personalities. I lean towards being extroverted; Brent is much more of an introvert.

I said some horrible, hurtful things to my brother in those years. Things I definitely regret. But there are no rule books for adoptive siblings any more than there are for biological siblings.

Both of us were told we were adopted: from our earliest memories we were chosen, special. But our interest  towards our birth parents couldn’t be more different.

Naturally curious, I always wanted to know about my birth parents. My brother did not. In my late teens and early twenties my need to know more peaked, and I started searching. Coincidentally, a few years after I began my search, the “active registry” opened.

I registered, not really knowing what I expected, but knowing that I needed more information. I had already  accessed my non-identifying information and showed it to my brother.

When the connection to my birth parents was established by the Ministry, I received a call.

“They got married to each other, after you were adopted,” I was told. I was surprised, but happy I would be able to connect with both birth parents. I was advised to give it time, and the social worker would contact me if they were ready to solidify that connection.

It wasn’t until I’d hung up the phone that the concept of siblings took on a new meaning for me. If my birth  parents had married and had children, I would have full siblings. I spent a number of days wondering what my brothers and sisters would look like as I anxiously awaited the call.

As it turned out, the fantasizing was for naught–my birth parents didn’t have any other children. Clearly, the only sibling I’m meant to have is Brent, and that’s okay by me.

Being part of a family means certain values and beliefs are passed down from parent to child. In aligning to those core messages, Brent and I are very similar, even though it wasn’t very apparent until we hit our adult years.  Despite no biological connection between us, we are both stubborn, independent, and often opinionated. We are also loyal and family-oriented, and embrace new information readily.

Being “chosen” children gave us more than just similar beliefs: it gave us the same attitudes towards family. No matter what, if your family needs you, you are there.

This was instilled in Brent and me from an early age. From the large family Christmas dinners when our dad’s side of the family gathered together in my aunt’s basement, to the cousins who babysat and shared secrets with us, we learned the importance of family and having a support system within that family. Although we apply that differently as individuals, we retain the overall philosophy.

I was asked by my mom’s sister once, “What’s it like being adopted?”

I answered, “I don’t know. What’s it like not being adopted?”

There is nothing else for me to know. I only know the family I have, and it’s a great one. Like any family, we share laughter, tears, and fights. When Brent and I married our spouses, our adoptions and our different relationships with our birth backgrounds needed to be explained. But the fact that I know my birth parents and Brent doesn’t hasn’t changed our family at all. In my opinion, we are siblings, just like any other set of siblings. We don’t look alike, or have the same interests or preferences, but there are plenty of kids from the same parents who aren’t alike. We just happen to be adopted–and we’re proud of it.

Proudly adopted, Ronda Payne joyfully lives in Maple Ridge, B.C. in yet another renovation-project home with her husband and their pets. She is a regular contributor to a variety of publications and has three (or more!) books on the go.