A community for Asian adoptees | Adoptive Families Association of BC

A community for Asian adoptees

The Asian Adult Adoptees of British Columbia (AAABC) is a volunteer organization that serves the Asian adult adoptee community in BC. Originally formed in 2009 as Triple ABC, the group relaunched with its new name in 2016, after a hiatus of several years. In this article, AAABC president Myla Choi shares what the organization is all about.

Note: as of 2021, AAABC is now the Transracial Adoptee Community (TAC). The group is open to all transracial adoptees who are now adults. Connect with them on Facebook.

Tell us a little bit about AAABC.

AAABC aims to build and strengthen a community of Asian adult adoptees in western Canada while building connections with our heritages, local cultures, and adoptive families and friends. We provide a safe environment for like-minded people to share stories and challenges related to adoption, or to simply grab a bite with some new friends.

Every 6–8 weeks, we host open (anyone can attend) and closed (adoptees only) casual meetups on the mainland or on Vancouver Island. Our meetups can be anything from a pub or restaurant get-together to a potluck at someone’s home. We like to mix things up and are always eager for suggestions of new places and ideas.

What is your connection to adoption? How has your experience inspired or influenced your work with AAABC?

I was adopted from South Korea at 9 months old. Growing up in Nanaimo, I didn’t know any other adoptees or people of Asian descent. I also didn’t feel anything was missing until I was told about a documentary on Netflix called Twinsters. That was the start of my new journey into finding my other self—my adopted self.

The documentary mentions an International Korean Adoptee Association’s Gathering (IKAA G16). It only happens every 3 years, but the next one was scheduled in Seoul, Korea, for later that same year.  I signed up immediately. Six months later I was en route to my first visit back to my homeland, and to meet more than 500 other Korean adoptees from around the world.

During my one week at IKAA G16, I learned more about vulnerability than I had in my entire life. On an average morning, strangers would be talking about birth family searches and discussing opposing views on adoption, all before a sip of coffee. It was amazing how our one commonality—being adopted—made it easy to share intimate stories that we may not ever have discussed before even with our closest family members.

My understanding of being an adoptee was shaken up on that trip and hasn’t stopped spinning since. On my last day at IKKA G16, I attended an executive meeting of adoptee organization leaders from around the world. That’s where I found out about Triple ABC. After learning that the group disbanded when its leader moved away, I knew that this would be my next journey.

What’s an especially rewarding aspect of your involvement with AAABC and the adoption community?

The most rewarding aspect is touching peoples' lives. I know it sounds cheesy, but it’s a reality. When someone is brought to tears because they’ve finally found the support they’ve needed for decades, that’s all I need to know we’re making a difference. The richness of the conversations that happen at every meetup always amazes me. Some aren’t even about being adopted, or being Asian, but are simply about new friends forming a special bond. 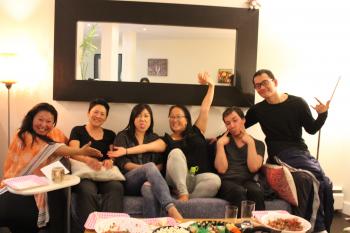 The biggest challenge we face is simply the size of western Canada.  It’s difficult to have meetups, even on the mainland or the island. Members need to pay for their travel, which limits who’s able to attend. This is definitely a hurdle we will face as we move forward. On the flip side, those that do attend really want to be there.

Do you have a favourite story?

My favourite story growing up is about "twin sister." To give some perspective on this—I’m Asian (of course), am extra short, and have black hair. My "twin" is tall, blonde, and Caucasian.  Our families grew up together, and we honestly and truly thought we were twins. We told people this everywhere we went. We’d even dress alike and giggle that our parents wouldn’t be able to tell us apart. Of course, to humour us, they would always act so confused about which one of us was which!  Reflecting on this story, I now see the beauty of innocence—or perhaps an example of how ignorance is bliss.

How can people get involved with AAABC?

We’re on Facebook, and we have both a public page and a closed group.  If you type in Asian Adult Adoptees of BC in the search bar you should be able to find them.  If you prefer, please email me at president.aaabc@gmail.com. By the time this article comes out, our website should also be up and running at www.aaaofbc.com.

Family means everything to me, but in my opinion, each person’s definition of family is completely individual. I was adopted into an amazing and supportive family, so they are my immediate family. Then I have my secondary family that my twin sister is a part of. Growing up with two sets of parents I could go to with any troubles is more than most people can ask for.  And now, I have my own new family: a partner of over a decade and our two adorable rescue dogs. For others, family may mean friends. Recently I’ve also been hearing about a lot of people connecting with their birth families.

Family is whatever you make it. Family can be difficult, family can be crazy, but at the end of the day, family is what will follow you through your life­—if you let it. And that is all I need. ●

Myla was adopted as an infant from South Korea and currently lives in Nanaimo, BC. Her degree is in Global Studies but she always seems to end up working in healthcare. She loves travelling, rustic camping, gardening, or simply hanging out with her dogs, family, and friends.