Everyone has a story: Meet the Hobbs-Perry family | Adoptive Families Association of BC

Everyone has a story: Meet the Hobbs-Perry family

Wow, we are the parents of two children that just celebrated birthdays. Our daughter just turned three and our son just had his first birthday.

The journey to become parents began when I turned 40, and my parental clock went into overdrive. It became clear to me, if I was wanted to make my dreams of being a parent come true, it was now or never. However, I didn’t bring it up to my partner for over a year, thinking it just wasn’t possible. Early in 2006, after my 41st birthday, I finally broached the subject. I discovered that we were both on the same page. However, we had doubts and needed more information, especially with regards to costs.

It’s funny how things work out, because shortly thereafter, while we were shopping, we met a couple of guys with a very new baby. Based on their interactions with each other and with the child, it was clear they were his parents. After speaking with them, we felt ready to proceed. 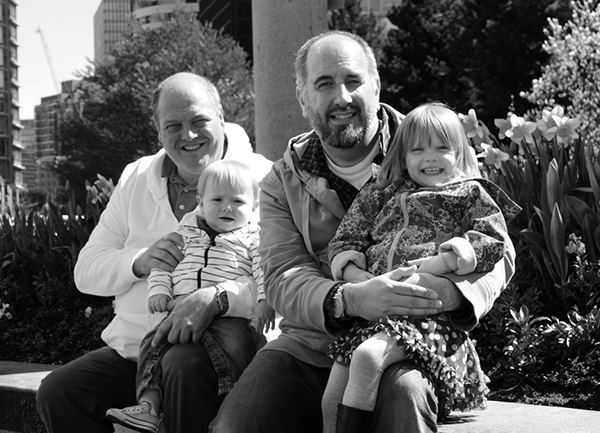 In March we met with Family Services of Greater Vancouver Adoption Agency (FSGV) to investigate if they were the agency for us. The meeting went really well, despite our nervousness about being two gay men who wanted a child. They made us feel really welcome and important.

Over the next four months, we did our home study, which was an experience we both thoroughly enjoyed. Our social worker made us feel very at ease, as we discussed our lives, and what kinds of parents we wanted to be. It gave us the opportunity to really examine ourselves, and made our resolve to be parents even stronger. Our home study was completed on August 14, 2006.

So far, the only people who knew about our adoption plans were our references. First, we told our parents. All was good except for one of the grandfathers, who has a tendency to speak his mind, in not always the most tactful way. Now, he absolutely adores both of our children, and has since their first meeting.

Looking back, we told way too many people, including friends, relatives and co-workers. It became overwhelming and frustrating because of all their questions. It hurt when we only had no news, or news that another couple had been chosen over us. We highly recommend that everyone be very cautious of who they tell, so they are not bombarded. For instance, only tell those at your job who need to know, such as your bosses. Everyone else will find out when it finally happens.

After the weekend course at our agency, we waited four years almost to the day. We had three close calls where we down to being one of two or three other couples being considered by birthparents. These close calls were awful, leaving us with questions like “why not us?” In retrospect, it was just not our time, which is easy to say now.

While waiting, we became model students at our agency’s monthly Waiting Parents Meeting. We attended to be with like minded people going through the something that no one else in our lives could relate to. We saw people come and go, while we remained, much to our chagrin.

In late fall of 2009 I had a bit of breakdown from all the waiting. On that particular day, I picked up my partner Alan from work and he instantly knew something was wrong. We drove around Vancouver and discussed what we had been going through. We decided that we wouldn’t sign for another year on our anniversary date in August.

In the coming weeks we packed up everything related to becoming parents, such as our homestudy, and baby items for our dream child. The dream was over and the time had come for us to let go and get on with our lives.

Something good was coming

In early 2010, I started to feel that something good was about to happen. In mid-March I found out I had won a large cash prize, for a contest I had completely forgotten about. Little did I know how that prize would fit into our adoption plan. About two weeks later, I received a call from our adoption agency. I had no inkling the call was about a child and I considered not picking up. The conversation was a blur.

When I told Alan “a baby was born and it’s a girl,” he asked who had a girl. None of our friends were pregnant. We were both a little shell shocked. We got to meet our daughter the next afternoon at the hospital, and spent the night with her. The next morning we went home, and began our family life, with the daughter we named Isabel.

Being parents to an infant came very naturally, even though neither of us had experience with the full-time care of a newborn. It was instant love, and Isabel took to us like she was always meant to be ours.

Oh, did I mention the amount of money I won in mid-March was exactly the amount we had to pay our agency when our daughter was placed in our home? Before the call, we saw that money as a windfall for a rainy day. It turned out it was a very happy sunny day when we used it as our family grew from two to three.

Very early into Isabel’s life, we learned that coming out had now become a kind of family value. We needed to provide a positive proud environment for her. It amazed us how quickly it becameapparent that a man or men with a baby can stir controversy. We fielded questions like “giving mommy a day off?” “where’s mommy?” and so on. We expected this from older generations, not people our age or younger, but how wrong we were. Being reserved people, these types of encounters annoy us, but we bite our tongues and merely state she had two dads. More often than not, our declarations go over well. We even get some congratulations. When the situation seems less than friendly, our response can be a little terse.

Thoughts of Isabel being on her own brought some sadness for us. Providing Isabel with a sibling seemed cost prohibitive, so we hadn’t initiated anything with our agency. In the fall of 2011, I was trying to come up ideas about how to start another adoption plan. All of sudden I thought that the ideal situation would be if Isabel’s birth mother had another child. Since this didn’t solve the funding problem, I let the thought go.

As 2012 began, I once again had the profound feeling that something good was about to happen. When I looked at the call display on our phone on March 27, 2012 and saw it was the adoption agency, I knew instantly that my random thought was coming true. I was completely blown away. Isabel’s birth mother had another child who had been born the day before, and she wanted the children to grow up together.

We met our son on Isabel’s second birthday (we shared a celebration with her before leaving her with a friend, at our apartment). Meeting this handsome little boy who was now five days old was once again love at first sight. We named him Nathaniel (Nate). The next morning, he met his sister, who fell in love with him right away. Later that day, after the doctors cleared him, he was signed over to us and we headed home with our two kids. The connection our kids have with each other seems as though they have been together forever. They adore each other and watching them interact brings tears to our eyes.

So here we are, just over a year since bringing Nate home. Our lives are really fulfilling and also just plain full. The laundry is always backed up, and our living room is Toy Central, cleaned up every night and ceremoniously redistributed the next morning.

In closing, even though our kids will never meet her, we would like to thank Isabel and Nate’s birth mother for the wonderful gift of parenthood she has bestowed upon us, twice. We have a closed adoption with our children’s birth mother. We would prefer it was open; however, we respect her decision that openness was not the route she wanted to take. She is forever in our minds for the dreams she fulfilled for us. Thank you.

Michael Perry was formerly employed in the financial world, and is now a stay-at-home dad. He finds being home with the kids to be the most gratifying thing he has ever done. His dream is to write a book on what he and his partner experienced in becoming dads.