Everyone has a story: Meet the Packers | Adoptive Families Association of BC

Everyone has a story: Meet the Packers

Editor's note: Cindy Packer, the matriarch of the Packer family, sadly passed away in December of 2018. AFABC wishes all the best to the Packer's during this difficult time, and we know that Cindy's kind and generous legacy lives on in her children.

The Packer household is a happy mishmash of culture and colour. Dad Mike’s collection of Coca-Cola memorabilia and bear-themed knickknacks share space with First Nations art, superhero toys, and Barbie clothes. Mom Cindy’s sewing machine and the tools she uses to make her kids’ elaborately beaded Pow Wow regalia takes up one corner of the living room, while a fluffy white cat named Snowball claims another. There’s a hand-built treehouse in the backyard, and a massive barbecue on the back deck that frequently cooks up mouth-watering wild salmon.

On any given day you might smell deep-fried bannock, delicious tacos, or steaming perogies in the cozy kitchen. That’s not just because the Packers are fantastic cooks who enjoy sharing meals with loved ones. It’s because their family’s culture is as varied and unique as their home.

When Mike and Cindy originally decided to adopt, they thought carefully about what it would take to parent transracially and transculturally. Their own ancestry is European, and they didn’t think they were prepared to parent kids from a drastically different background. “We didn’t want to be fake,” said Cindy.

Their social worker proposed a match with a little girl named Guadelupe, and her younger brother Derrick (brother Levi would join the family two and a half years later). Guadelupe’s birth father was Mexican; Mike and Cindy had strong ties to that country and felt comfortable with its culture, so the match made sense. There was more, though. Guadelupe, Derrick, and Levi’s birth mother was from the Carrier nation, which meant the kids were also Aboriginal. 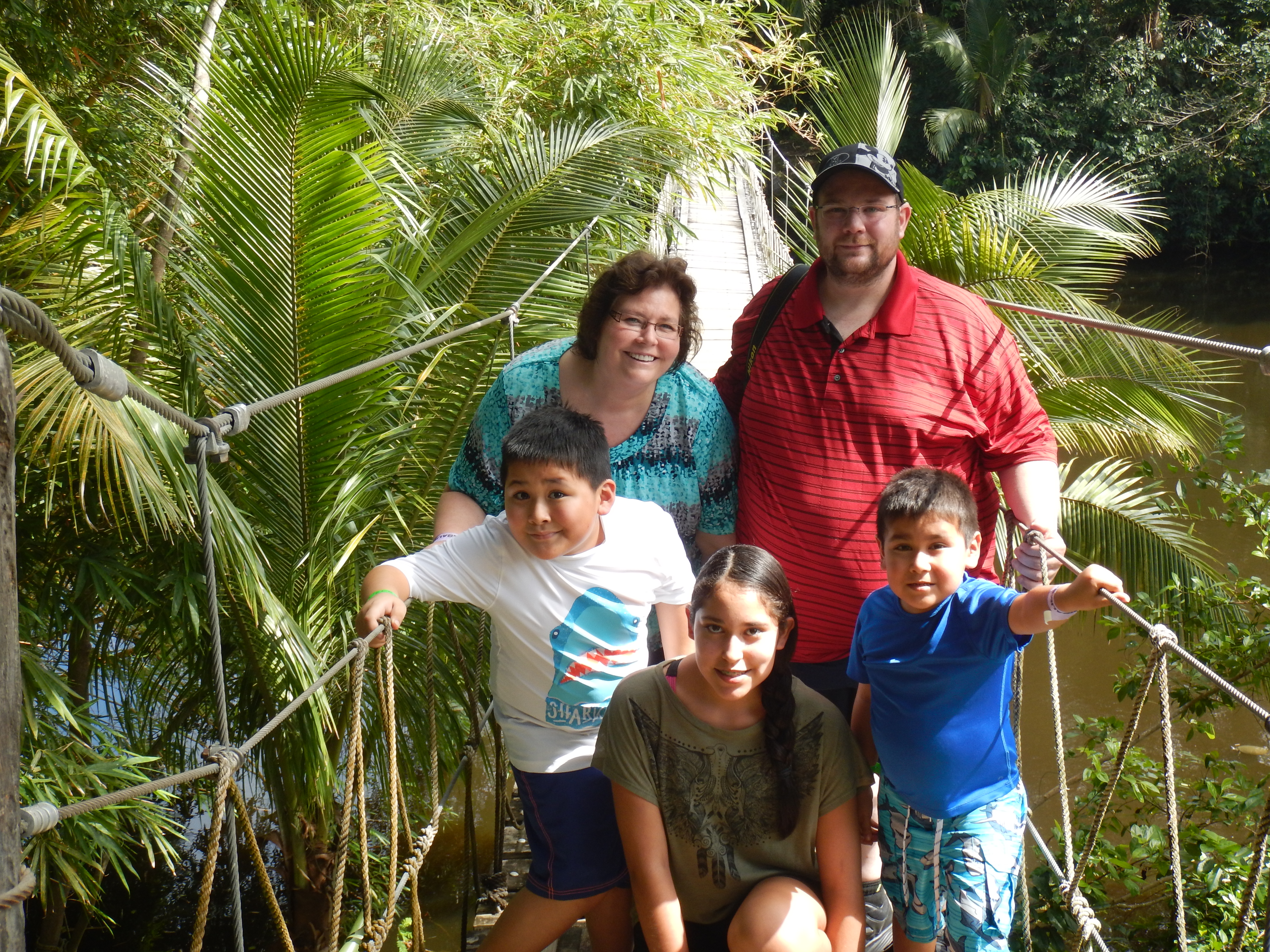 The new parents decided they were up for the challenge after all. They dedicated themselves to building connections with the urban Aboriginal community and nurtured respectful relationships with mentors, elders, and guides. They attended Family Night at their local Friendship Centre regularly, and became active in Pow Wow dancing.

Eight years into their adoption, they’re the furthest thing from being fake. Other families in both the Aboriginal and adoption communities come for them to mentorship and guidance in their own journeys into understanding and embracing culture.

Cindy emphasizes that incorporating culture into everyday life is at the heart of their family. For example, at dinnertime the family does Mahsi Cho (thank you in Carrier language), a small gratitude ceremony sharing what each person is thankful for that day. She also describes how her son respectfully greeted his new Aboriginal Support Worker according to traditional protocol, with only a gentle reminder from her. When I visit their home, Guadelupe leads the smudge ceremony that cleanses us before we handle the Pow Wow regalia.

Cindy acknowledges that at first, these practices sometimes feel awkward. Over time, though, they become a natural part of everyday life, and create a meaningful foundation for occasional events like Pow Wows, ceremonies, and Guadelupe’s two recent coming-of-age celebrations.

Traditional moontime for a modern girl

Cindy and Mike were acutely aware that during their years in foster care, their kids missed out on the celebrations and rites of passage that most other children experience. When Cindy learned about traditional First Nations coming-of-age ceremonies that centred on a woman’s first moontime (menstruation), she knew it was something she wanted her daughter to experience.

Historically, the details of a moontime ceremony would be passed down from one generation of women to the next, through oral tradition and shared experiences. However, much of this knowledge was lost due to the violence and cultural suppression perpetrated by European settlers in recent centuries.

Cindy’s friends and mentors in the First Nations community were enthusiastic about the idea, but no one had experienced the ceremony first-hand. There certainly wasn’t a Wikipedia entry or YouTube video or library book to turn to for guidance. Instead, Cindy combined her research and insight from trusted mentors with elements of their families’ European and Mexican cultural heritage to create a ceremony that was both traditional and contemporary.

For four days, Guadelupe stayed in a house rented especially for the occasion. Traditionally, menstruating women would spend their moontime outside of the main village, in a teepee or other shelter. This was done because women’s energy during moontime was believed to be so powerful and magnetic that it could interfere with ceremonies and people’s spirits. During this time, Guadelupe focused on purifying herself, honouring Grandmother Moon, and reflecting on her life, her future, and each day’s theme: celebration, healing, new beginnings, and understanding. Women in her life were invited “to share [their] powerful knowledge and wisdom, and to welcome her into this new phase of her life.”

Guadelupe also observed a number of traditions before and during the celebration, including dietary restrictions (no berries allowed!) and avoiding contact with men—brothers and dad included.

The celebration concluded with a feast, and culminated in the moment when Guadelupe stepped through a cedar bough threshold festooned by rainbow ribbons and was ceremonially presented to her community as an adult, complete with a new adult name—Zeet-Gada-Wu, which means “Spirit Bird Woman”—which she’d received at a Sundance ceremony.

Although Cindy incorporated elements of Guadelupe’s Mexican culture into the moontime ceremony, the focus was on her Aboriginal heritage. Three years later, they switched things up for Guadelupe’s second coming-of-age celebration: her quinceañera, or “quince.”

In Mexican tradition, a girl becomes a woman on her fifteenth birthday—her quince años—and that calls for a very special, very traditional party. Once again, the Packers launched into research-and-planning mode. They carefully selected the traditions that suited their unique family, such as the Ceremony of the Shoes, where the birthday girl receives her first pair of high heels to symbolize her entrance into womanhood, and set the ones that didn’t aside.

They found a Mexican restaurant in New Westminster whose owner was excited about to help them plan the party. They hired a band, chose an elegant evening dress for Guadelupe’s debut, learned a special father-daughter dance, ordered gifts for all the attendees, and helped Guadelupe learn to walk in her gliltter-encrusted heels.

Although they can’t safely have openness, they even found ways to honour Guadelupe’s birth family during the special night. Cindy captioned her favourite photo from the evening like this: “Proud of Mike for being so courageous and strong. G was blessed to be able to dance her first dance with both of her dads.”

In the photo, Guadelupe dances with her dad in her elegant dress, her glittery tiara, and an oversized black leather jacket that belonged to her birth dad.

After the party, the restaurant owner told the Packers it was the most authentic quince he’d ever seen. High praise indeed for two parents who felt out of their depths when they started their life as a cross-cultural adoptive family.

Obviously Cindy and Mike work extremely hard to educate themselves and to be respectful, humble, and flexible. I asked Cindy if they worry about misstepping and accidentally causing offense, or of being accused of cultural appropriation. How do people from her kids’ cultures of origin respond to her as a white adoptive mom? Do they ever receive negative feedback?

Cindy says most people they’ve met have been helpful, giving, and welcoming. In the end, though, what matters isn’t what people think of or say to her. What matters is that her kids get what they need to grow up strong, proud, healthy, safe, and connected to all of their cultures and communities, and most of all, to each other.

“Even if you get it wrong, be gentle with yourself. At least your heart was in the right place,” she says. “We’re so grateful to have strong support in our lives. Our family has been blessed with people’s kindness.”