Most days, as I push our stroller up a hill loaded with my son and a week’s supply of groceries and feel the muscles in my arms and legs working, I am reminded of the total body workouts I used to enjoy at my local gym.

Not that long ago I lived a very different life, one that included a husband, and a charming little house that we  owned on a tree-lined street, a fulfilling full-time job, a fun fashion part-time job, volunteer work as a board director for two companies, four weekly gym workouts, and a circle of friends for dinner parties and occasional travel. Actually, my husband and I had a shared passion for international travel and had visited many key cities in North America, toured most of Europe, part of the Caribbean, and six states in India.

In November 2005, three months before our South East Asia trip, I walked away from our 15-year, unhappy  marriage. My ex is a great guy, but not for me. I did not know where I was going or what I wanted, but it was enough to know what I did not want. A few months later, I decided to go back to school and to study in my  favourite city in the world, London, England. I’d grown up immersed in stories of English history, literature and royalty and the chance to study there fulfilled my two long held dreams of a Master’s degree and living abroad.

Surprise! I want to be a mom 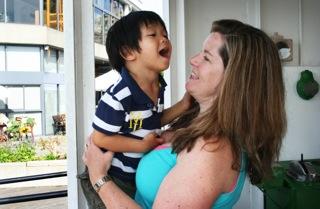 In May of 2008, while completing my second semester I realized, to my great surprise, I wanted to be a mom. The subject of parenthood had not come up much when I was married and living in the ‘burbs. If I thought of raising children, I felt overwhelming indifference. I regarded those peers and friends who’d chosen to have kids with a faint, smug distain for their perceived boring, orderly lives. Being a mother seemed such a mundane existence and clashed with my feminist nature. Surely there were many more adventurous and exciting things to do in life than change diapers and serve dinner every night.

But suddenly, as a single, unemployed, student in a foreign country, motherhood was all I could think about. I decided to try to adopt a child. Although on the surface this seems a radical departure from my values, when I thought about parenting, motherhood made perfect sense. All my life I’ve been disturbed by the inequity in the  world and level of child poverty and starvation. In my mind’s eye, I could clearly see my 12-year old self and hear her say, “If I ever want to be a mother, I’m going to adopt”.

With the decision made to go down the adoption road, I decided to leave the choice of country, culture, gender, and religion open and see with whom I would be matched. I used to gaze up at the stars at night and wonder where in the world my child was.

When I advised my family members and friends, everyone was cautiously optimistic but concerned about a variety of factors. I was single, how would that be perceived, and would I be considered as worthy as an adopting couple? What about the child’s medical condition? Was I prepared to mother a special needs child? What if he or she had AIDS or hepatitis? Or was severely malnourished? Or had attachment issues?

Once I returned to Vancouver, I registered with a local adoption agency and my social worker explained that while the agency did not discriminate against single applicants, some countries refused to adopt to anyone other than a heterosexual married couple, and some also stipulated that the adoptive parents had to follow a particular  religion.

Of the countries open to me, adoption from Vietnam had the best chance of success. That’s why I chose this  beautiful country, which had intrigued me since I researched it for my 2006 trip. I never envisioned then that one day I would be an adoptive mother of a child from Vietnam.

I appreciated access to articles and stories of others’ adoption experiences from various countries, and I read a great deal about the potential health issues facing orphans in Asia. There are abundant resources to assist  prospective adoptive parents to make informed decisions.

Light of my life

I knew that once I was matched with a child I would then travel to Vietnam and spend about a month there  finalizing adoption details with both Vietnamese and Canadian government officials. I was gratified that both my mother and my sister, Loreen, wanted to travel to Vietnam to meet the little one and assist us in becoming a  family. In June 2010, my mom, sister, and I walked into an orphanage in northern Vietnam and there, after months of staring at two little pictures, I met my seven month-old baby son. I knew from the first moment I held baby Binh that I was embarking upon the grandest and most meaningful adventure of my life. I knew that  whatever my past accomplishments, whatever I would achieve in the future, nothing was more important to me than raising my child to be a moral, productive person who would use his gifts to contribute great things.

My son is named Lucan (meaning light and in honour of Sir Lucan, a Knight of the Round Table) Binh (meaning peace) Tu (meaning star). Lucan Binh Tu is my star bright, peaceful knight. We don’t have any family living nearby. Luckily my office and Lucan’s daycare are close to our home and we have a good transit system in our city so we don’t need to own a vehicle. I get my exercise pushing the stroller up and down hills and running around local parks. I run errands on lunch breaks and do a lot of household shopping and banking online. I book vacation hours for hair appointments and Lucan’s doctor appointments (thankfully those are not frequent).

It is challenging being a single parent, but not awful or overwhelming. I do have to be resourceful and careful with the budget, but there are lots of free family activities in most communities year round. We’re not big chain store shoppers; we shop locally and buy less. Some rainy winter weekends, we take long train rides and local bus trips because getting to the destination is half the fun. Sometimes, in fact, the journey is the most fun. We don’t have a TV, so we pay fewer utilities and spend more time living life then watching it.

I have to be careful too about “me” time. I only ask friends to babysit if I need to work late or on a weekend. I’m either with Lucan or at work 24/7, so I’ve learned to use some evening time when he’s asleep for movies, books, fitness, and other interests. Some weekend mornings Lucan becomes part of my dance routine, which he loves. I want to take more schooling to upgrade my teaching skills but can’t attend night classes, so I found a diploma program online that I can complete over a few years. Adult personal dreams and goals are still possible, but you have to be creative in finding a way to achieve them and still be a focused and fun parent which, after all, is our most important job.

I’m excited about our plan to return to Vietnam and eventually tour all of South East Asia many times as Lucan grows up, so we can both understand and appreciate his beautiful birth land. I intend to hire a Vietnamese language tutor, so we can learn to speak the language and more fully comprehend the stories, history, and culture. I wonder if Lucan will be curious about his birth family and how he came to be placed near an orphanage gate, well wrapped against the cold, on an early December evening. I wonder about the tremendous love his parents have for him, why they felt they could not raise him and, therefore, made the heartbreaking choice to leave their child for adoption. I am quite sure if they could see their son now, they would be pleased and proud of the intelligent, strong, loving, carefree, and outgoing person he is. I hope one day Lucan and I will find his birth family; perhaps with technology, like DNA testing and social media, it will be possible for us to connect with them so Lucan has both birth and adoptive families.

But for now, we have each other and our community in BC and every day is full of wonderful adventures. I have less money, few friends, no time, and no house, and I now buy clothes at consignment stores. But I have a darling bundle of boy and have discovered so much about myself in being Lucan’s mom. He has brought out the best in me, and I have never been happier.

Karon Trenaman is an adventurous soul, long fascinated with exploring other cultures. She lives in a charming house near a leafy park with her lively, intelligent, humorous, and imaginative son, Lucan, and a sweet and pretty rescue kitty named Ivy. A version of this article originally appeared on www.offbeatfamilies.com.