The gift of adoption | Adoptive Families Association of BC

The gift of adoption

Romance, a ranch, and raising kids

Like so many children, I grew up on stories of Dick and Jane and Spot. I imagined I would fall in love with Prince Charming and have perfect children and live happily ever after. My youthful adventures took me across Canada to Yukon where I met my Prince, a commercial pilot who later morphed into a rancher. Between us we had twelve siblings and naturally assumed we would have at least half a dozen children to run wild on the ranch.

Well, the years passed and we faced reality and began the adoption process. I remember when the call came—it all happened very suddenly. It’s impossible to describe the joy and happiness that filled our hearts as we went to the office and met our 10 day old daughter, Allison. She was and still is perfect in every way. 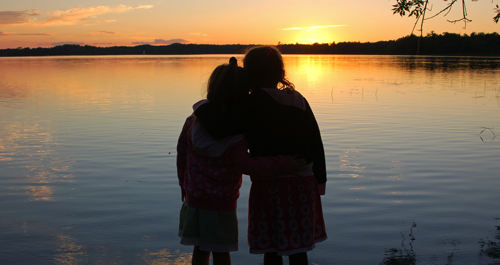 We never wanted our daughter to be an only child, and so we applied for a second infant. Just a few days prior to Allison’s fourth birthday we went to pick up her birthday present: a new baby brother. She was very excited for about four days, until the crying became annoying and she decided we should return her brother and get a puppy instead.

Michael, born a month early and struck with colic, didn’t find life to be easy. When he started kindergarten he weighed all of about 26 pounds, and we discovered he only had hearing in his right ear. None of that stopped him from becoming the sweetest little guy in the world.

Our family grew again in 1989 when a relative called out of the blue and asked if we were interested in adopting two more children, a brother and sister, ages three and five. The mother of these two youngsters had older twin boys and was struggling on her own. We didn’t hesitate to say yes. We’d always wanted a large family and we had plenty of resources and wide open spaces to offer.

We picked these two little people up in the dark one evening and drove them away from their home. What a terrible trauma. But Tabitha and Darcy were the strongest little souls you could ever meet. They went on to face the world with honesty and incredible bravery.

When my children were 20, 16, 15 and 13 we tragically lost their father in an accident. We had already made the decision to send Darcy to a private school, hoping to help develop his talents. I followed through with that plan. It’s a mistake I have regretted to this day. Here I was, sending off a child who had already been given away.

For a short time after the accident we were in survival mode. To say that I would not have endured without my children is not overstating the case. The love of my children enabled me to carry on.

We grew. The ranch grounded us. The children matured into caring, curious individuals with wonderful hearts. All except one son have established relationships with their birth families and know and enjoy their birth siblings. I believe this is very healthy and has added a great deal to their lives. I’ll encourage my newly married son to go through this process as well.

My eldest daughter is the mother of my amazing granddaughter, and has recently started the adoption process as a single parent. As a rancher she has resources and a wonderful lifestyle and can offer a permanent family to a child. In addition, she has First Nations ancestry and her daughter is Metis; they are both bilingual. What a rich, diverse opportunity they can afford to a little person.

Children of our heart

The adoption process is necessarily long and somewhat cumbersome. We will never be able to make it perfect because we are dealing with humans and all their eccentricities, but the families that it creates, with all their bumps and warts, are the wonderful reward for perseverance. Families today come in all shapes and variations. This is part of our beautiful and growing diversity.

When my eldest daughter was about six, one day she started a conversation with “When I was in your tummy, Mommy ...” I corrected her; she had always known she was adopted. I said that although I had never carried her in my tummy, I had carried her in my heart for many years. These children are truly the children of our heart, and adoption is a gift that we share forever throughout our lives.

Her Honour Judith Guichon, OBC, is the Lieutenant Governor of British Columbia. This article is based on the text of a speech she gave at a press conference for Adoption Awareness Month in November 2014.