When Ellen and her husband adopted a child from foster care, they were blindsided by the challenges. Now, Ellen is the happy mother of a successful adult daughter. She hopes her story encourages other parents to hold on to hope.

Our journey started when we were first married. We discussed having children and decided that we wanted to have one biological child and then adopt an older child from foster care. Instead we quickly had two biological children. When they were 13 and 14, we were finally ready to adopt.  It took three more years to get through all the paperwork, training, and meetings. I always say I was pregnant for 9 months with the first two and 3 years with the last one. 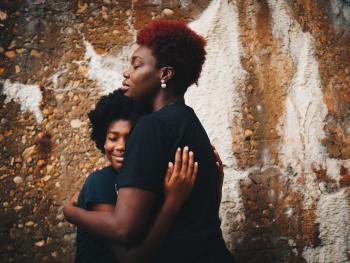 When we were finally matched we anticipated a glorious time. We had been prepared for a honeymoon period followed by a testing phase, but that was not our reality. Our daughter was 8 when she arrived home. Her birth mother struggled with addiction and everything that involves. A step-grandmother had helped to care for her, but she passed away from cancer. Our daughter remembers being homeless, sleeping on stranger’s couches, and wandering the streets all night because, as she remembers it, “she [meaning out daughter, then four years old] couldn’t find a place to stay.” Just before her fifth birthday, her mom voluntarily surrendered her to MCFD. Our daughter still remembers this and has trust issues with social workers, who told her that her mom would be back for her.

Our daughter moved several times and experienced an adoption breakdown during her time in the foster care system. She was afraid of everything and developed some pretty strong coping skills to try to control the uncontrollable situations in her life. When we were matched with her, I moved (short-term) to her city to facilitate the bonding process. She came home within one month of our first meeting. In retrospect it may have been too quick.

I had adoption leave through my work and stayed home with our daughter for the first year. I had anticipated doing hair, Barbie dolls, baking, crafts, and all the girl stuff. But our daughter wanted nothing to do with me. She glared at me, kicked at me, and verbally and physically attacked me. On top of that, she could not sleep; she would rage and cry all night. There was no honeymoon period. This behaviour started the first night she came home.

The social worker told me that it was a bonding opportunity, but she only wanted my husband or her new siblings, and she would cry and scream to get them to come. At night she’d fall asleep around 8 or 8:30 and would sleep for about half an hour before she’d start screaming and crying. She couldn’t sleep, even if my husband stayed with her. All the pent up anger, fear, and pain came spewing out. I asked her why she never acted like this in foster care. She told me, “You can’t get mad in foster homes. You cannot act bad. If you act bad, they move you.”She had been to foster homes “where the mom was mean.” I guess she saved it all up.

I would take her to a parking lot so she could scream and rage in our truck until morning. Multiple times I had to explain to the RCMP why I had this crying, screaming little girl out that late at night.

It quickly became clear to me that she was grieving the loss, abandonment, and betrayal she’d experienced from the women in her life: her mother, her grandmother, her aunts, her social workers, and now her foster mother.  She had no need or desire for another woman that would betray her. Bonding with me was not in my daughter’s plan. She wanted her mom back. She wanted me to go away.

My husband could not understand why she hated me. He was enamored with her. She wanted him to dress her dolly, comb her hair, take her places, cuddle on the couch, cook her dinner. I felt like a monster.

When she went back to school after winter break, I was exhausted. I would drop her off at school and go home to sleep for a couple hours, and then start all over again. I was confused, defeated, and broken. There were times when I could not even respond to my husband. To him, she was perfect. I tried to talk to him about going for counseling, but he seemed to think it was my problem.

I felt ashamed—like a failure. I thought about leaving. I felt like I was in a fog. I walked around like a zombie most days. I was afraid to tell anyone how defeated I was, how unhappy I was, and how lost I felt. Everyone at our church was so impressed with her and happy for us. Some of my friends were understanding, but some believed that we were crazy for adopting in the first place. I spent a lot of time praying and wondering how I would get through the next 10+ years. In my darkest moments, I thought terrible things about the worth and value of my life. There were days when I felt like she was an alien invader that was out to get me (as terrible as that sounds). For six long months, I was absolutely defeated by an 8-year-old child.

My older children were a balm. They kept me going. Our oldest, who was graduating from high school, just kept telling me that I was a good mom and it would get better.

Finally, our daughter’s teacher talked to me about an empathy training program at the school. She thought our daughter might benefit from it. My husband refused to believe that there was anything wrong with her, but I convinced him to allow a church friend who was a psychologist and an adoptive parent to assess her.

The psychologist had our daughter draw two pictures, one of our family and one of a house. He then explained the drawings to my husband and I. She had drawn my husband with no hands and no mouth, with her standing in front of him. She had drawn me with claws and jagged teeth. The psychologist explained that our daughter thought men were powerless and that she could control them. The picture of me indicated that women were dangerous and untrustworthy. The picture of the house had no windows on the bottom and no doors, rather like Rapunzel’s castle. She was shutting herself off.

The psychologist sat my husband down and explained that our daughter had developed a coping mechanism called triangulation, which allowed her to feel safe and validated. Basically, she did not trust women and wanted nothing further to do with moms. Triangulation requires a victim (her), a persecutor (me), and a rescuer (my husband).

He explained that the way to handle this was for my husband to tell our daughter that I was his primary relationship by showing her that he would pick me over any of our children. Which he did, in the line in Disneyworld a month later on a scary ride, when she wanted to sit with her Dad instead of me or her siblings. The lady next to us was not impressed.

The psychologist helped my husband understand that he could not make up for the pain of her past and that he and I needed to be a strong team. He worked with me so that I could see that I needed to build trust with our daughter, that I was a good mom, and that I did have some control. He worked with me on self-care and basic cognitive control. I think this was the most essential gift—I felt heard.

He also worked with our daughter on empathy and basic cognitive behavioural therapy (CBT).  He also helped all of us with sleeping techniques: bedtime rituals, not answering our door 20 million times a night, and self-soothing techniques that really worked. Eventually our daughter learned to fall asleep and stay asleep on her own.

This was 10 years ago. Last month our daughter left for university. She was a four-year honor roll student. She does not drink or party. She makes thoughtful decisions and is able to weigh her emotional reactions and thoughts better than most adults (thanks to CBT). She was home this past weekend; we went shopping for sweaters, had coffee, ate lunch together, and visited with friends. She is everything I ever hoped for. And, she wants to pursue child psychology. I also have gone back to school: I’m working towards a degree in Christian counseling.

Being depressed after an adoption feels like a precarious position. Friends and family that have walked through the process with you are so excited and see only the fulfillment of a dream. It’s hard to find or even ask for support, to admit that perhaps you are not as happy and joyful about the adoption as you thought you would be.  Typically I’m a very happy, optimistic, and emotionally healthy person. I had never experienced that level of failure or been in such a protracted depressive state. I could not understand how I could sink that low. I tried to work harder, to be better, and to put on a brave face. I was even afraid that if I complained I might discourage other potential parents from adopting and keep children from finding homes.

It took professional help, someone from the outside, to tear off the bandaids and help our family heal despite the shame of not living the happily-ever-after that we intended. I truly believe that children who have been affected by cyclical patterns of abuse, addiction, and abandonment need help to develop the tools to reject harmful behaviours. I also believe that all adoptive families need support from the community because adoption always, always involves loss. I would absolutely recommend post-adoptive counseling. Thankfully, we were able to push for funding for through the ministry. The other two things that got me (and my marriage and adoption) through were my personal faith and my commitment to the process.

I want to emphatically share with all the adoptive parents out there who may be struggling due to unrealized expectations, changes in identity, or lack of sleep and emotional support that there is hope. I am sharing my story because I want people to know that I have been there. I thought I was strong, but this is not a journey that one can or should walk alone. Get help and reach out! My daughter is living proof that adoption changes lives, and that the brokenness that you live through can make you stronger and more resilient in the future.

Ellen Wiser is the proud mother of three adult children.