How to talk to kids about race and racism

Last week I expressed some concern about whether or not my first-grader was old enough to be learning about some of the more violent aspects of the civil rights movement. One of the frustrating outcomes of that conversation is that the teacher (and a few commenters) misinterpreted my concern as being over conversations about race in general, which couldn’t be further from the truth. I am a firm believer that we should be talking to our kids about racial differences from a very young age.

The truth is, at the age that most children begin to notice gender differences, they also begin to notice race. I think many of us are unaware of this, because it can be a subject we inadvertently avoid. We want our kids to be “colour-blind,” so we pretend not to notice differences and encourage them do to the same. But, in doing so, we might miss some important conversations, and even inadvertently send a message to our children that noticing the race of others (which they inevitably will) somehow makes them bad. 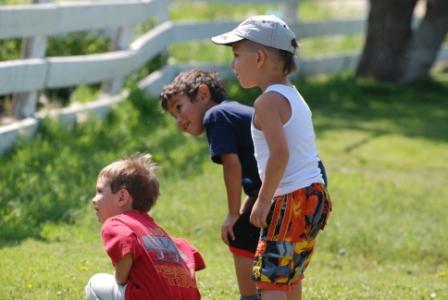 hildren are social beings, and one of the first social lessons they learn is to sort and group. Boys hang out with boys. Girls hang out with girls. If your children show these gender preferences, chances are they have racial preferences, too. This doesn’t make them little racists. It just means that they need some gentle guidance from you to be racially inclusive. Training our kids to move from a self-centered infant into a more respectful and empathic person—that’s the stuff of raising kids. Racial acceptance should be a part of that.

At a certain age, all kids are prone to leaving others out based on external factors. This can be gender, race, disability, etc. I think kids need help to overcome this natural tendency to seek out “sameness.” I also think they need intentionality, especially when living in non-diverse areas. Kids do see colour and when parents ignore it, the lesson children learn is that diversity is something too scary to talk about.

I don’t know that there is a universal timeline that fits every child, because maturity levels vary. Obviously, Jafta learned a little more than I would have preferred in his first grade class, but it’s turned out to be fine. We’ve had some good conversations, and I’ve pulled out some of the books for Grades 3-5 that we we’ve been holding back until he was older. I think going to a celebratory Martin Luther King, Jr Day parade this weekend helped reframe what was a scary story into a source of pride for his race and all they have overcome. The other kids enjoyed the parade, and we had many talks about how Martin Luther King, Jr. made it possible for people of every colour to be friends.

I really want to emphasize that the suggestions I’ve made are not just suggestions for African-American or transracial families. I think all of us should be introducing these concepts to our kids. A recent study, outlined in the book NurtureShock, discovered that most white parents don’t ever talk to their kids about race. The rule is that because we want our kids to be colour-blind, we don’t point out skin colour. We’ll say things like “everybody’s equal” but find it hard to be more specific than that. If our kids point out somebody who looks different, we shush them and tell them it’s rude to talk about it. It’s kind of like the sex talk. If we never talk to our kids about sex, they are gonna have to figure it out on their own. That will probably lead to some not-so-great influences filling in their gaps of knowledge.

Here are a few practical suggestions for developing an environment in which diversity is valued:

Kristen is the mom of four children within four years via birth and adoption, and has been blogging at Rage Against the Minivan as a coping skill since 2004. She is a marriage and family therapist, a freelance writer, and a musical theater geek. She is also the managing editor of ShePosts, an online news magazine for women in social media, the editor of Mama Manifesto, a collaborative parenting blog, and a columnist at ConversantLife and the OC Register where she writes a parenting advice colum.