Indigenous fatherhood: a celebration | Adoptive Families Association of BC

Shawn lives in Revelstoke with his wife, Leah. He’s been a foster dad for over a decade, and his adopted kids range in age from 4 to 33.

It’s rewarding. I don’t think there’s a more important job in the world. I grew up in the foster system from the age of 5 and it was very, very negative. At first [my brother and I] were told that we would be back with our parent in two years. When the date came they told us that our mother didn’t want us, which was a lie. We were told it was our fault. That was the way it was described to us.

By the age of 7 I was already contemplating suicide. It was very abusive in the foster home, and I was constantly running away. So my experience in the foster system was very negative, which is why I became a foster parent. I thought if I could stop just one child from going through that it would be awesome.

For me it’s very positive. I learned about my Aboriginal background while we were doing the course for adopting our [two youngest] children. One of my uncles was doing a family tree, and that just happened to coincide with the time when we were doing the adoption process. He was actually able to provide a non-status Aboriginal number for my grandfather. It was very exciting because I got to go on this path of discovery of my Aboriginal background while learning about [my daughters’ background].

There’s not much in Revelstoke at this time but we do take our kids annually to the Roots Celebration in Pillar Lake, which is with all Aborig­inal foster [and adopted] kids. It’s people from all over BC and Alberta. It’s very interesting to see slightly different customs amongst the tribes. There’s nothing specific for Haida—our children were the only Haida there, actually—so it’s really an eye-opener for them for culture.

When they get old enough, there’s a day camp in Haida Gwaii and that’s what we’ll be taking the kids to. We found about about that during the adoption process, through a case worker for the Haida Nation. 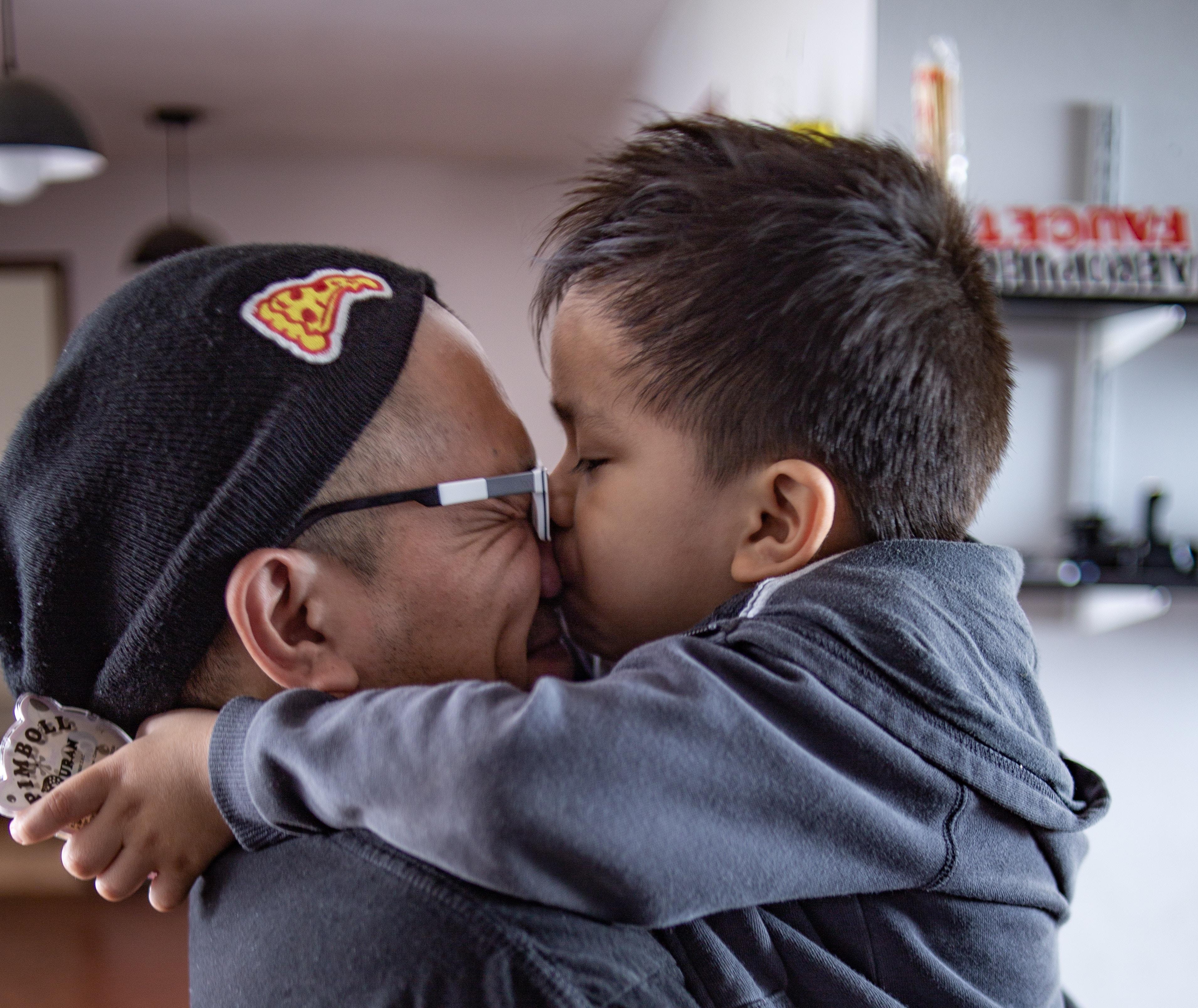 During the adoption process I had a lot of time to reflect. A lot of stuff you just want to forget about in your past, and the questions you need to answer to become an adoptive parent are those vital questions. Talking about the abuse, that kind of thing, that’s what I had to divulge. It’s been a journey.

It brought back some memories, but I found it very rewarding because I’m one of the fortunate ones. I can take these indecencies [from my childhood] and turn them around and find the silver lining in everything. My silver lining is that I’m able to take the things I went through and ensure that it doesn’t happen to other kids.

Be honest. If I could say anything it’s be honest with yourself, your spouse, and the Ministry or whatever the adoption agency is. You need to be 100% honest.

Brenden Moore is a father of four and the coordinator of the Aborig-inal Dads program, a joint program hosted by Métis Community Services and Westbank First Nation. This popular program supports Indigenous fathers through positive role modelling, cultural activities, education, and fun activities like “My Daddy and Me” outings where dads and their children get together for quality time, adventures, and relationship building.

When I hear the word “father” three things come to mind: protect, provide, and teach. Dads, especially Native dads, protect and provide. That’s what a lot of us are taught. Protecting is something warriors did. One of the most important things I’ve learned as a dad is to try to make my kids feel safe. Lots of hugging, lots of getting down to their level, understanding. Providing is about food and shelter but also about culture and ceremony. Teaching means basic skills but it’s also about being a role model for positive behaviour. My philosophy is I’m looking at dads as elders-in-training. That’s how I look at fatherhood today. I’m an elder-in-training. And that’s how I look at my kids: they’re going to be elders one day. They’re not little hoodlums. They’re just not elders yet. I see the long-term perspective, not the short term. My kids will be raised up in a proper way so they’ll feel like valuable parts of the community.

I pray with my kids a couple of times a day. We try to sing and dance and drum. I’m actually Dene but my mom married a Cree man and I grew up in the Cree way. My wife’s uncle, he’s Okanagan, and he’s been a big influence on me too so I try to incorporate some of his teachings. In our culture we like to provide ceremonies, rites of passage. That’s pretty important as kids get older, to move into teens and adulthood. It’s usually a challenge, like going up a mountain or going hunting by yourself, and when you come back, the community comes and acknowl-edges that you’ve surpassed this challenge. When I look at fatherhood, when I look at Native dads, I see a community that is living in trauma. Colonialism has ravaged us like a disease, killed 90% of us. And the rest of us are on reserves. The cure for that disease is culture and community. About 80% of the dads in the [Aboriginal Fathers] program don’t have any type of culture to cling onto. We were ripped away from that for many generations. Take [fathers] out of trauma, put them back into their community, their culture, and they thrive. That’s what our culture can do for us dads, to help us to really turn a corner.

My stepdad has been a rock in my life. We used to go to sweats almost every weekend until I was 17. We’d go four times in a weekend: Friday, Saturday, and twice on Sunday. I don’t have a lot of memories of us just playing together, but culturally I feel really blessed, like the grandmothers and grandfathers were looking out for us. I didn’t know my grandpa well because I moved away when I was five, but he was in the newspaper every week, got awards from the govern-ment, wrote books about Dene stories. His name was George Blondin. He had a story for everything. Stories of creation, animals, medicine power, everything to do with our culture and the Dene laws. You’d just hang on every word and never want to leave. I see a little of myself in him.

There was a medicine man who we went to the sweat with, Harvey Tootoosis from Saskatchewan. He was a genius. A chess champion, an army veteran, one of the first Native people to work with computers. He fasted and was told by the old men, the grandfathers, “You were meant to go and heal people.” He gave up a high-paying job for a meagre existence of people giving him food, blankets, and tobacco. People travelled from all over the country to be healed by him. He lived a life of service and that’s what I try to do now.

You need to go out and learn to be an elder. That’s your job. If you didn’t have an elder in your life, didn’t have a dad who taught you how to be an elder, then you should go out and seek one. You’ll find one elder, someday, if you keep looking, that will take you under his wing, and be like a dad to you. The friendship centre is probably the most reliable place to start. Usually they’ll have elders who work there or who are resident elders. Usually one of the first places people can go to is Family Night. Just phone them up and ask them.

As a kid I really struggled with who I was. I wasted so much of my life, following the wrong people, and didn’t embrace who I was or have a sense of pride about my identity. I hid going to the sweats from all of my friends. I didn’t want them to think I was a dirty Indian. It’s only in the last five years, I’d say, that I’ve become super proud of who I am.

An Indigenous child, growing up in a [non-Indigenous] foster home or adopted, is never going to be feel right inside until they accept and embrace who they are. It’s so important for those kids to know they have people out there who have the same blood as them.