Living openness: Unpacking the gift of adoption | Adoptive Families Association of BC

Sometimes I feel like there’s nothing going on--with adoption, that is. Life is full with school, friends, soccer, baseball, work, field trips, family gatherings, and the endless parade of birthday parties. For us to just stop talking about adoption would be easy, but that would be a shame.

I started talking to Victor (now six) about his adoption before he could speak. I’d rock him to sleep and whisper the story of the day we met into his tiny baby ears. I never wanted him to remember the exact day he found out he was adopted. I wanted it to be something he’d known as long as he could remember being alive.

Of course, Victor couldn’t understand a word, but over time, telling his story got easier. His birth parents visited, Skyped, and sent cards and presents. Once he had an inkling of what adoption meant, Victor knew two things for sure: he was adopted, and he had birth parents who cared deeply about him.

Knowing you’re adopted and truly understanding what it means are two totally different things. In a previous column, I wrote about the moment when I realized that we’d normalized adoption to such an extent that Victor thought all kids were adopted. I learned my lesson: question, review, repeat, and dig deep. 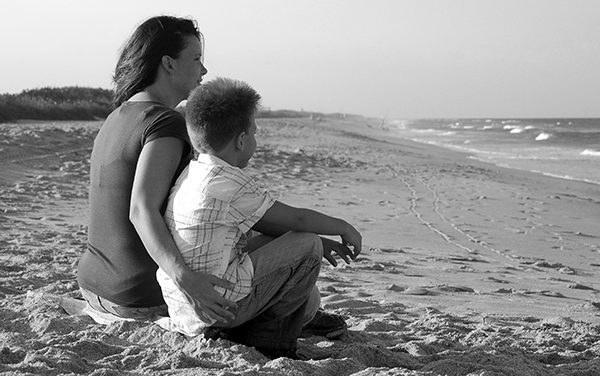 I now take any opportunity to test Victor’s understanding. When he asked me why his friend was having a seventh birthday, I said it was because her mother squeezed her from her uterus and gave birth to her seven years ago. Victor pondered this for a few moments, looked at me seriously, and said, “But I did not come from your uterus, right Mama? I came from my birthmom’s uterus.” Ding, ding! Correct!

A conversation about what makes someone an adult led to a discussion about teen pregnancy and how high school students (like his birth parents) can have children, but may not be ready to be parents. This led to a detailed explanation of how babies are made. He was so disgusted by our sex talk that he assured me he would “never, ever be doing that, ever.” But at least now he knows how it happened!

Ultimately, I want him to know that he’s always welcome to talk about his birth parents or his feelings around adoption. I want him to be the kid that says, “Yeah, yeah Mom, I know…”

One day, I was carrying Victor home on my back after a bad fall, his head nestled against my neck. We stopped at a bench where someone had written, “Every moment is a gift.” I read it out loud and Victor said, “I am a gift.” My sensitive adoption alarm bells went off. So instead of saying, “Yes, you are,” I asked him why he thought he was a gift. As I suspected, his idea had to do with adoption.

Victor struggled to explain. He said that his birth parents, “Well … when they were in the hospital … and they gave me to you …” and then he couldn’t finish his thought. I paused, took a deep breath, and said, “It’s true that you are a gift. Your life is a gift, and you are gift to your birth parents, to us and to all who know you. Your birth parents found us and chose us to be your parents because they were not ready to be parents.”

I wanted Victor to know that his adoption is not a one-way street. We didn’t just receive “the gift of a baby,” and walk off into the sunset. We entered a relationship; we made a pact and a promise to raise him so that he’d always know the people who gave him life.

We then talked about intangible gifts, like the gift of happiness. He told me he was happy and a bit silly, too. I said that he was lucky to be a happy child, that his temperament was a gift, but that it was okay to be angry and sad and all of those things, too.

Then, under my breath, my voice cracked as I whispered to myself that in truth, for his dad and me, he was the greatest gift of our lives.

Charlotte Taylor is a Vancouver mother in an open adoption with her son’s birth parents.