Early Egyptian mummies indicate that tattooing was exclusively a female ritual intended to honour and protect women during pregnancy and childbirth. Tattoos have enjoyed a renaissance of late and, not surprisingly, the tattoo trend has given opportunity for ink-art representations of the complexity of family in the adoption community, too.

One of the most famous adoptive moms to show her family ink is actress Angelina Jolie, who proudly displays a column of the geographic coordinates of her children’s (three biological and three adopted) birthplaces on her left arm.

Tattoo artist Dave Allen, of Craftsman Tattoos in White Rock, says that a very high percentage of the designs he does, especially for first-time tattoos, are for family symbols. “People want their tattoo to have meaning, and family is usually the most meaningful thing in their life,” says Allen. “The designs people choose are infinite and as unique as the people and the relationships that they represent.”

Jen Hillman, an adoptive mom of two boys, has three tattoos, all related to her family. The first, a heart wrapped in flowers on her lower leg, is a representation of her family that she got after her sons, Matt and Cody, were adopted. After her mother died in 2003, Hillman had another heart, this time representing her mother, flanked by two angels—her two boys—tattooed on her lower back. Her latest tattoo is a beautiful purple pansy lying softly on the inside of her wrist. It is a perfect match to the one on the inside of Matt’s birth mother’s wrist. Jen and Tracy had the tattoos done together this summer to honour and signify their relationship.

Finding the right symbol or image to represent a family relationship can be daunting, admits Allen. He advises clients to think deeply about the relationship they’re signifying. Bonding moments, possessions, or anything symbolic that is shared, from a piece of jewelry to a work of art or an event – just about anything can turn into a workable tattoo, he says. Allen has an African medallion tattoo in honour of his brother who died several years ago and who had extensive travelling experience and a passionate connection to Africa. “There is always tremendous communication in imagery,” Allen says, “but it doesn’t have to mean anything to anyone except the person getting it.”

Allen’s client, MyraJean Marshall, sports a tattoo of stars on her foot. She had three of the stars – representing MyraJean and her two biological children – inked in after their births. Two shooting stars were added last year after her two adopted children came into the family: “I have other tattoos and I appreciate tattooing as an art form,“ says Marshall. “And it’s a natural way to have my children with me all the time, forever, the same way children and family are forever.” 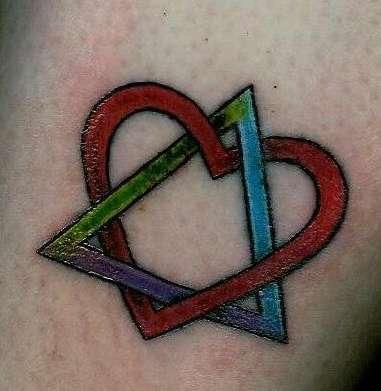 Tianna Madeiros got her first tattoo in April of this year. A colourful triangle interwoven with a heart adorns the back of her neck. “I wanted a tattoo and I wanted it to be meaningful,” she says. “This represents my birth family, my adoptive family and me,” she says.

Allen says that most people who get one tattoo get more. “It’s very empowering for most people. You’re in control and it’s a permanent, irreversible commitment. There’s pain and there’s pride. It’s powerful stuff.”

For centuries we have decorated and marked our bodies. We do it with jewelry, clothes and makeup. Tattooing takes that artistic and cultural expression another step and allows people to permanently and deeply respect their social connections. Just like families, each tattoo is unique and each has a different story; like adoption, they are beautiful, personal and forever.