Meet the Ewasiuk-Pohl family | Adoptive Families Association of BC

In BC, approximately half of  the adoptions that take place every year are foster parents adopting their foster kids. In this article, you'll meet the Ewasiuk-Pohl family, and get a glimpse into that world.

Long-time foster dad Russell Pohl sums his family up in one word: FAB. It’s short for fabulous, of course, but it also stands for foster, adoptive, and biological. Russel and his husband, Darrell, are parents to two biological kids and five adopted kids, in addition to all the children and youth they've loved and cared for during their 15 years as foster parents.

“We also have several kids that have grown up with my bio kids that are considered our adopted kids,” Russell says.

By the end of this year, the family’s permanent tally will have grown by three: Russell and Darrell are legally adopting three more of their foster children. For those of you keeping score at home, that’s a total of ten kids between the ages of 30 and 5. And then there's the newest addition, this time of the canine variety: a dog from Guatemala that the family rescued and named Listen Linda.

This is clearly a family that isn’t afraid to love big, live outside the box, and define family on its own terms. “We’re all odd,” says Russell. “Unique, different, many, some special needs, public, [and] oh yeah, gay.”

Russell says he and Darrell became adoptive parents “organically,” by way of foster parenting. In the very beginning of their fostering journey, a baby was removed from their home because they were gay. That was 17 years ago, though, and it hasn’t been an issue since.

Now, Russell describes his family as a “one-stop shop” for the children they foster. “You either are going back to a healthy bio family, whatever that would look like, or there is an adoptive family already waiting, or we are adopting you. Period.”

Even the Ewasiuk-Pohl family’s adoption processes are too big to be contained by the usual box. “The first adoption was four years in the making. Way too long,” says Russell. In the end, though, he and Darrell adopted five kids, from three different biological families, all at once. 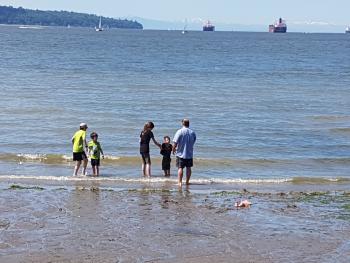 Somewhere along the line, Russell acquired the nickname of Mr. Mom. “The kids used to call me Martha because I loved watching Martha Stewart,” says Russell. Over the years, that nickname morphed into Mr. Mom. "TV loved it, media loved it, so it stuck," says Russell. "Besides, I have 10 kids! [Now] Mr. Moms World is my umbrella company name.”

Is this how Russell envisioned family life years ago, before he’d fostered or adopted? “I imagined it peaceful, quick to be able to do things, jet setting to wonderful destinations.”

A quick glance at Russell's blog reveals glimpses of a life that doesn’t seem too far off that mark: exciting travel, delicious food, and happy family memories. Russell even runs his own successful business, a cooking and catering company called Mr. Moms World.  He’s also kicked off a new direction with a blog and vlog on his brand-new website, “Mr. Mom's World Speaks.”

But what is it really like behind the scenes in this big, fab family? “Life has smacked us in the face! We get to do all the above, just [with] a whole lot of work and timing. And it’s all but peaceful.”

When asked how they do it all, he’s quick to say they don’t. Instead, they strive to do their best, with the support of a whole team that includes his mom, his two oldest children, his son-in-law, and his good relationship with MCFD.

All of Russell’s adopted kids also have openness with biological family members. “What we have found is that the family usually starts as they mean to go on,” he observes. “If they are great at making visits on time, that holds true throughout.” As the kids get older, it’ll be their choice as to how much time they want to spend with their biological families.

Russell says highlights of his life as Mr. Mom are watching his kids gather their confidence, graduate from high school, and find success. But life isn’t always a cakewalk.

“A low point is watching [kids] make tragic mistakes, some of them lifelong, says Russell. “The challenge is how we move forward, how we continue to grow as a family. It’s not easy. Many children in care bring huge challenges with them, or their families may bring in challenges.”

One of the most difficult situations Russell and Darrell faced was when one child’s actions meant they had to move him to live in another home. Similar situations often result in adoptions being disrupted, but Russell’s response reflects the compassion and patience he’s developed through his experiences as a foster and adoptive parent.

“Just because kids screw up doesn’t mean they should be tossed to the curb,” says Russell. “He is our son and always will be.”

Russell encourages other foster and adoptive families who experience tough times to stay the course, too. “Hang in there,” he says. “You’re not alone. You are making a difference. Believe, stay true, and never give up.”