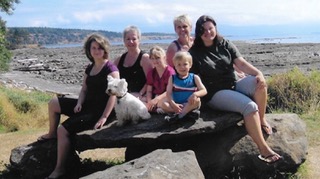 More on these topics:
LGBTQ2S

Jan Radford has been an active member of the AFABC community for over twenty years. In addition to speaking on a number of panels, she has facilitated AFABC’s Safe Babies workshop. A retired nurse, she currently resides in the Lower Mainland.

After four years of attempting to get pregnant through artificial means, Jan and her partner Lindsey decided that it was time to give up on starting a family. “[We decided] we’ll just spend the college fund and have fun,” Jan says of their decision, laughing. But soon after, they learned of a co-worker who had pursued an international adoption in Romania. Jan and Lindsey had seen the news about the situation in Romania, but hadn’t known there was an opportunity to go there and possibly adopt. So Jan and Lindsey decided to take the necessary steps to pursue an international adoption.

But the year was 1990 and adopting in BC as a lesbian couple was not an option. “People said ‘How did you get the home study done and get approved and everything when you were a lesbian couple?’. And I said, ‘I lied.’” The social worker who conducted their home study wrote that Lindsey was Jan’s supportive live-in friend: soon after, the province approved Jan’s adoption application.

Once Jan got to Romania, the process didn’t get any easier. Jan ended up spending three months in Romania. Jan’s babies were very sick when she first met them; each weighed under 4 lbs, Luckily, Jan had spent some of her career as a NICU nurse and cared for them in Bucharest until they were stable enough to travel. New mom Jan and her twins returned to BC and were welcomed by Lindsey and family and friends at the airport.

But upon returning home, the family hit their next hurdle: Jan and Lindsey wanted to apply for a joint adoption. So they made an appointment with a lawyer they knew, also a queer woman, and hoped for the best. Jan says of their first meeting: “The lawyer laughed at us and said ‘You’ve got to be joking. We’re not going to see [queer people allowed to adopt] in our lifetime.'” Their lawyer recommended that they apply for joint custody and guardianship instead; if they were able to limit the amount of publicity their case drew, they might be able to get approved without too many questions being asked. Thankfully, they were able to get the papers signed without significant press attention. In the early 1990s, Jan and Lindsey became the first 2SLGBTQ+ couple to get joint custody and guardianship in BC.

Jan and Lindsey focused on raising their family for about a decade. But when their daughters were in 7th grade, Jan and Lindsey decided to become foster parents for MCFD. They knew there was a great need for foster parents and thought that the twins would benefit from the experience, too.  Most of the children would stay for 5-7 months, and understood that the plan was for them to be adopted. But it was hard to grow close to kids and then have to say goodbye. “It was really taking a toll on our hearts,” Jan says. So when the child they were currently fostering became eligible for adoption at the age of 2, they decided to apply. Neither was sure MCFD would allow them to adopt: Jan was in her early 50s, and her partner was in her early 60s. And though time had passed, and gay marriage was now legal, they weren’t sure if they’d be approved to adopt now that they were an openly queer couple. But it ended up being a perfect match. Besides already having a connection with H., the adoption was also a cultural match: H., like Jan, is Métis. Soon after, H’s biological half sister joined the family and Jan and Lindsey’s family was complete.

After having to lie the first time they went through the adoption process, Jan and Lindsey, who were married in 2004, were amazed by how easy it was to apply to adopt their younger children. Jan came out in 1977, in her late twenties. “I think back to that whole period, how hard it was and what a struggle it was.” Even in the 1990s, the number of hurdles Jan and Lindsey faced to get joint custody were significant. Today, Jan is a member of a memoir writing group for 2SLGBTQ+ seniors. Recently she was reading one of her stories to her son. “It’s a really good thing you’re writing stuff down,” he said. “Kids my age need to know this stuff.”