Meet the Lohses, again: Annette | Adoptive Families Association of BC

The Lohse family first appeared in the April/May 1998 issue of Focus on Adoption magazine, where Annette told the story of adopting Mikayla. Today we catch up with them and hear about the following 18 years from three perspectives: adoptive mom Annette, adoptee Mikayla, and birth mom Lisa.

In part one, we hear Annette’s perspective.

On November 10, 1984, my husband Kevin and I said our “I dos” in a small town church. We always knew we wanted a family and hoped for three or four children. In 1988, those dreams finally started to become reality when we welcomed our beautiful daughter Jazmin.
After Jazmin’s birth we struggled to conceive a second child. Months turned into years and every pregnancy test came back negative
We were devastated. We sought out doctor’s opinions and fertility treatments but had no success in growing our family. One doctor’s abrupt question about adoption finally lead us to talk more seriously about our that option.

We made the decision to adopt from the United States, and started our adoption process in February of 1996. We hired a social worker to write our home study, and listed our profile with an agencies in Florida, Michigan, and Texas. 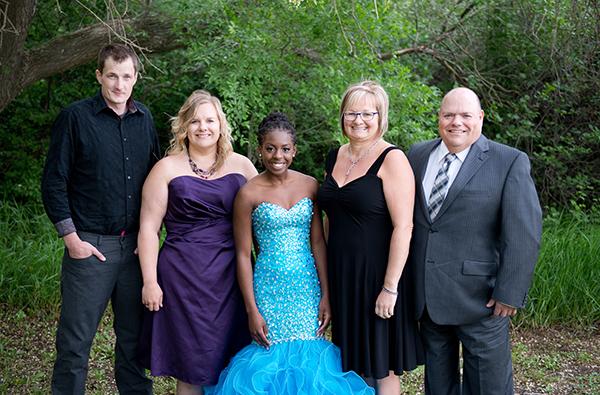 On September 18, 1997, we received a call from our Florida adoption consultant that forever changed us. She asked if we could travel next week. I laughed, only taking her half seriously, and said, “I guess so!” We made phone calls to an attorney in Florida and booked flights with the hope we’d come home with a brand new baby.

Finally, the big day arrived! Mikayla Dionne made her way into the world. On September 25, her mother signed the relinquishment papers and Mikayla became our daughter. We walked through the hospital doors, saw our beautiful baby girl, and immediately fell in love.

Standing out in a small town

When we began our adoption journey we talked often about what it would mean to adopt interracially while living in a small, primarily white community. We worried about whether our child would have a difficult time because of racism. Thankfully, our family and community welcomed Mikayla as our daughter with open arms and hearts.

When Mikayla was in grade two I went to her school to read a book about being adopted. After I had finished the story, one little guy looked at me and said “I didn’t know Mikayla was adopted.” At that age she was just Mikayla to the kids, not a girl who was adopted.

It wasn’t always easy to be the only black child in our community. Mikayla was victim to name calling, comments about her skin color, and questions about why she and her parents didn’t match. She also faced stereotyping. Some people thought she should be a great basketball player or musician just because of her darker skin.

As our daughters got older, people would sometimes comment on Mikayla being adopted when she and Jazmin introduced themselves as sisters. The girls often responded by turning the situation into a joke. They’d overreact and exclaim that Mikayla didn’t know she was adopted! They both have a great sense of humor, which has brought them closer over the years.

We did a lot of research about what it might be like to be an interracial family, but I don’t feel the research really prepared us for what we encountered. While we had the support of our family, friends, and community, we still dealt with racism. We’ve always spoken openly about it, and we all feel that allowed our family to become stronger and more connected in a unique way.

My husband Kevin says that adopting interracially “opened our minds to the way we view and treat others from different cultures and to how others treat them too. We see racism in comments or jokes when we may not have before.”

When she was still quite young, Kevin and I talked about how we might need to send Mikayla to a more diverse school one day. That day came when she started high school. We decided to send her to a school just over an hour away from our family home. She was able to live with her sister Jazmin most of the time she was there. lt wasn’t what we wanted, but we knew it was the best decision for Mikayla.

Within just two weeks of her starting at her new, more diverse school she was a completely changed person. She learned about a variety of cultures, and finally felt accepted by everyone. When she came home on the weekend we were always thrilled to see how excited she was about school and her future.

When Mikayla was a teenager and was struggling with her identity, she often told us she should be living with her birth family in a black home. That was challenging for us, but we still knew in our hearts that she truly loved us.

Mikayla met her birth mother, Lisa, for the first time during those years. We’d always been open with Mikayla about her adoption and her birth family, and maintained a letter-writing and phone relationship with Lisa over the years. In 2004 we took a family vacation to Florida and met up with Lisa and a few other family members. It was wonderful to finally meet her and hug her.

Since then, Mikayla has visited her birth family several more times. To be honest, Kevin, Jazmin, and I were nervous and worried, but my gut told me it would be OK. Mikayla was always reassuring and let us know she simply needed to discover her heritage and embrace it.

Kevin and I have met many wonderful people and have made lifelong friends because of our adoption. We were blessed not only with Mikayla but with her birth family. It warms my heart to hear how excited Mikayla’s brothers get when they talk with her on the phone or hear she’s going to visit. It bring tears to my eyes when I see Jazmin and Mikayla talking about life or giggling over something together.

Not all adoptions go this way—some adoptees don’t even know their birth mother’s name. We’re so grateful for our experience and the life we’re all able to share with Mikayla.