Making documentaries on adoption is more than just making movies.

After the film is completed, the complexities of adoption continue. In documenting adoption and orphan  experiences, we saw many opportunities to get involved.

In Family Portrait in Black and White, we told the story of foster mother Olga Nenya, and the 16 biracial orphans for whom she cares. One of the children, Andrey, is sweet, smart, and strong, but he has no one to protect him. Thanks to a fundraiser, we were able to send Andrey to a Swedish family for the summer. This year, we are looking for a Canadian family who understands the Ukrainian or Russian language and is willing to open their home to him.

Another child, Kiril, is now a young man. Against all odds, Kiril has recently completed his university studies but has been unable to find work in Ukraine. We are now working to bring Kiril to Canada for a Master’s program, after which he’ll have many more opportunities. 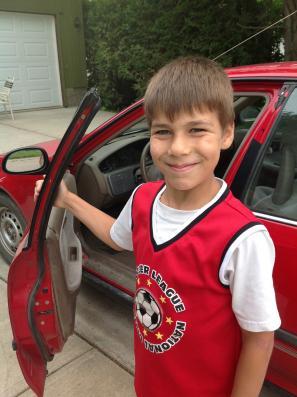 Our most recent film, High Five: A Suburban Adoption Saga, is about the Ward family of Surrey. Martin and Cathy Ward met the children they ventually adopted through a summer hosting program. Working with a U.S. based  non-profit organization, Frontier Horizon, Martin has helped dozens of Ukranian orphans spend the summer or Christmas in Canada. These children got to meet a loving family, and many found permanent homes.

Frontier Horizon is non-profit organization that strives to help orphans in Ukraine and Nicaragua by connecting  them with families. The families, in turn, gain a better understanding of orphaned children’s lives and needs. At first the program only operated in the United States, but for the last five years it has also been running in Canada. While Frontier Horizon is not an adoption agency, many families do decide to adopt the children whom they host.

The Travel Program occurs twice each year–once in the summer and once in the winter. The program’s cost is  approximately $3,500, plus a $150 application fee and a share of $1800 fee for the guardian that is split with other hosting families in the area.

While working on our latest film, we thought it might be beneficial for the adoption community to have a place to share their experiences through video. We created the website Know Adoption to allow people to use a webcam to record their thoughts on adoptionand interact with others. We also made all our films available on the site.

From Russia For Love, our first documentary, dealt with adoption from Russia’s orphanage system. It is sad to see that 12 years later, after thousands of Russian children found loving homes in North America, President Vladimir Putin has banned adoption to the U.S. and to single individuals from countries that allow same-sex marriage. Our next film, Baby Cold War, will present the true stories of adoptive parents with Russian adoptees. We’ll be looking for stories, so please don’t hesitate to contact us.

Boris Ivanov is Interfilm’s “hands on” producer in charge of development and production as well as marketing for the company’s slate of documentaries. Reach him at info@interfilm.ca.