Opinion: Black lives matter in Canada, too | Adoptive Families Association of BC

An adoptee reflects on black diversity in Canada and the importance of a global Black Lives Matter movement.

Here in Canada, anti-black racism is usually denied, ignored, and played down. The classic response from non-black Canadians to mentions of systemic anti-black racism and injustice is “well, there is more racism in the US than there is here”. This irks me to my core because it shuts down conversation and dismisses our experiences. I’m tired of educating my peers, but at the same time, I recognize the need to seize these opportunities to set the record straight.

The growth of Black Lives Matter protests beyond US borders highlights the urgency of dealing with anti-black racism and systemic inequality in Canada and the rest of the world. To me, this movement inspires hope and change.

From disconnection to diversity 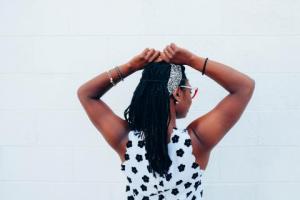 I’m a black Canadian of Ethiopian origin who was raised in Québec by white, anglophone, adoptive parents in a completely white rural environment. I was disconnected from black people for three quarters of my life. That changed when I moved to Montréal. Suddenly, I was surrounded by a diversity of black people from the French and English-speaking Caribbean and also from francophone West Africa.

I was happy for the diversity, but because I didn’t know anything about Ethiopian culture at the time, I didn’t feel like I belonged. I actually felt closer to black Americans than to black Canadians. Black Americans on TV and in movies were the only black people I saw for most of my life! I admired them for surviving years of oppression, emerging victorious and carving out a space for themselves as an essential part of American society. However, we have a history of slavery and institutionalized anti-black racism here too. It’s just not as well-known.

I often have conversations with my black American friends about the black Canadian identity. I don’t think it’s accurate for me to call myself a black Canadian, because I was born in Ethiopia. I am Afro-Canadian, or Ethiopian-Canadian, and I self-identify as Ethiopian and black. Black communities in Canada and the issues that affect us are diverse.

Most black Canadians tend to identify more with their ethnicity or their family’s country of origin. We don’t want to deny our blackness. We just don’t really have a single, shared, easily identifiable, cultural, black Canadian identity.

Also, in places like Québec, linguistic and cultural differences separate French and English-speaking black communities. Some people even consider themselves Québecers, not Canadian. Nonetheless, we have a lot in common. We face the same systemic racism: racial profiling, high rates of unemployment, under-representation in private and public sectors, and over-representation in prisons, to name a few examples.

For me, identifying as black is a way of honoring my connection and commitment to other people of African descent, and to our shared experience of racism, discreditation, marginalization, resistance, resiliency, and brilliance that spans five continents and thousands of years.

Get real about race

I think the huge outpouring of support for Black Lives Matter has unsettled some people because, as the writer Brené Brown says, “we can’t have real conversations about race without talking about privilege and when people start talking about privilege, they get paralyzed by shame.” I believe that adopting anti-racism as a practice requires introspection, honesty, and a commitment to listening to and learning from people of colour. It’s not an easy feat, but it’s do-able.

Visit www.blackhistorycanada.ca to explore the history of black communities in Canada.

Kassaye MacDonald lives in Montréal, Québec. She is the co-founder of the Facebook group Ethiopian Adoptees of the Diaspora, and is working on an anthology, Lions Roaring Far from Home, which features the voices of Ethiopian adoptees.

This article was condensed and edited from a post that originally appeared on LostDaughters.com. Reprinted with permission.