Around the time of his third birthday, my son John started urging me to adopt a baby. He launched a relentless, unequivocal campaign. He has always been a determined individual, and he had made up his mind. He was going to have a sibling.

What I did not want to tell him was this: some five months before, I had finally given up trying to force myself to be practical. I had called the lawyer in Guatemala who gave John his name and handled his adoption. He suggested a little girl, then ten months old, who had just become eligible for adoption. He looked at her photograph as we spoke. "You will be enchanted," he told me. Then, with a glow in his voice that shimmered above the satellite connection, he added, " And John will have a sister."

Since August, I had kept her pictures in the top drawer of my nightstand and looked at them when John was asleep. I very much did not want him to know. Like pregnancies, adoptions in process can fail. I didn’t want to set him up for that hurt. Even if all went smoothly, his sense of time wasn’t precise enough for a long wait. I had not intended to tell him about this child until the courts in Guatemala made her his sister, and possibly not even then.

In January, though, when his pressure to adopt became persistent, it just felt wrong to keep giving vague answers. So I told him that I had called the lawyer and he knew of a baby we could adopt. Is it a girl or a boy? John asked. I told him a girl. "Just what I wanted!" he cheered. To keep him from getting attached to a specific individual, I still did not show him the pictures or tell him her name. In his terms, she became "Our Sister."

I had read somewhere that kids his age can measure time by thinking about holidays, I hoped Our Sister would be here around Easter and expected her in June. Since I didn’t want John to get disappointed if there were delays, I reached far into the future for a distant holiday and told John she would probably be here around Hallowe’en. I winced inside when I said it, as if voicing that white lie would make it true.

Delays did come, for no serious reasons. John talked about Our Sister frequently. I should have started the adoption sooner, he admonished me one day, because it was taking too long! He came up with the idea of writing her a letter. I mentioned it to the lawyer, who laughed and said I should send it down and he would read it to her. I took dictation and John wrote the letter to Our Sister. He told her he loved her. 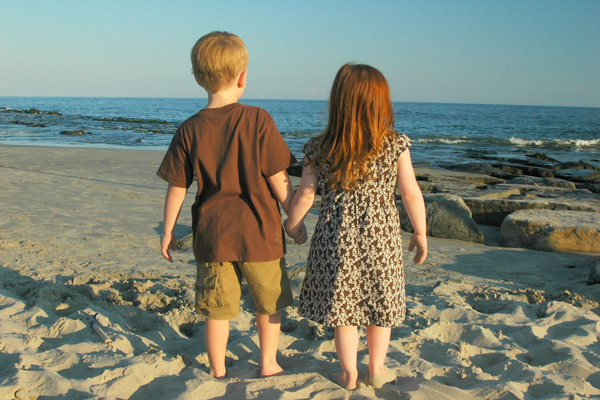 Two days before Halloween, John waited in the Vancouver airport with his grandmother to meet Maria, now two, for the first time. He still had never seen her picture. The public had to wait at the baggage claim instead of the gate, so John first saw us as we were coming down a long set of stairs. He ran up the stairs towards her, and then remembered himself and gave me a perfunctory greeting before turning to his sister. He embraced her and kissed her. When she got a good look at him, she smiled with a radiance that I had not yet seen in the three days since I’d met her. That night they played giggly running games in our house as if they had lived together all their lives.

Rena, as she calls herself, made a policy decision only to wear John’s outgrown clothes. People constantly mistook her for a boy. She didn’t put on a dress for six months, and then only twice. Even now, when she is out without John and people address her, she invariably replies, "John at school." If John wakes up before her in the morning, he wants to get her up immediately. He has appointed himself her protector on the playground. I don’t ever have to worry if she is watching a TV program I haven’t seen, he assures me, because if she is scared he will explain to her that it is not real. When he fetches a treat for himself in the kitchen, he always produces one for her too. John and Rena fight sometimes, and play together a lot, and whisper conspiratorially to each other while throwing giggly glances at me. "John did it!" Rena chimes, instants after sending a plate of food to the floor. She is ready and eager for her brother to take the rap for her, but she is also the same two-year-old who stood by his side in the examining room of a medical clinic, murmuring "Poor John, poor John" and patting his back with her hand.

Their experiences are those of any siblings, except for one small difference. Ever since Rena arrived, they have frequently heard people ask me, "Are they really brother and sister?" This doesn’t seem to affect John and Rena right now. They may assume all siblings field questions about the authenticity of their relationship. When they do start to wonder, I can easily explain what the people want to know. It will be harder to explain, though, why the people want to know. I’m not sure myself. The kids are clearly siblings now. Why is it so significant, to strangers as well as to friends, whether their DNA patterns match?

It may reflect a bias so ingrained in our society that the people who ask do not hear the implications of what they are saying. When I told a good friend I had decided to adopt, he assured me that I still was young enough to get pregnant later. Hearing "adoption", his impulse was to comfort rather than congratulate. I’m sorry that my son and daughter will grow up exposed to such messages. I’m even more concerned that some people choose not to adopt because they have sensed these negative currents and believe them. I lament all the families they could have had that will never be formed. I’m sorry about all their missed opportunities to know the intensity of being a parent. I’m especially sad about the children who will not be adopted because society tells people considering adoption that their family could only be artificial. How did something as invisible as genes become the standard for defining "real" families?

I don’t have much time to wonder about that now, though. It’s more fun to think about John and Rena, who piled into my bed again this morning, wrapped themselves up together in one fuzzy blue blanket, and kissed each other before they turned to me. Then, as I rushed from the room to take our puppy outside, I heard Rena say, "John! My pillow!" and the first negotiations of the day began. Yes, they are really brother and sister.