Reunion in writing | Adoptive Families Association of BC

In her creative non-fiction essay “The Letter,” J. Jill Robinson writes about how she reunited with her birth son,  David. He was married and himself an adoptive father when David and Jill found each other. We sat down with her to find out more about her experience as a birth mother in reunion.

How did you decide to tell your story?

The story about David’s conception, birth, and then the reunion, was something I had wanted to write for a long time. The desire rose up in me and I went to work. Many things come to fruition at different times, and the same is true of writing.

Did most of the people in your life already know you were a birth mother?

If the topic came up in conversation, and it seemed a relevant, meaningful time to bring it up, I’d say something, tell an abbreviated version of the story. But only with really close friends did I ever talk about it in depth. Like many intensely personal parts of your history, you have to consider carefully what you share. It wasn’t a conscious decision to reveal myself to the world as a person who got pregnant when she was a teenager and gave the baby up for adoption. But I’ve never shied away from identifying myself as a birth mother. It was more of a shameful
thing for my parents, I think, but they were from a different generation with different sexual mores. 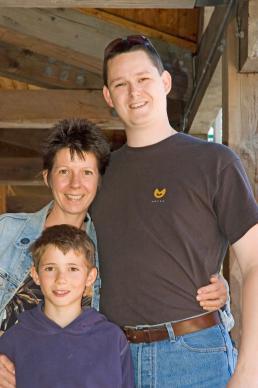 How do you feel about openness registries and access to birth records?

It was the opening of the records that allowed me to reconnect with Dave. I am all for it. There has to be the opportunity to make a choice. But it has to be mutual. Not everyone wants to find or be found.

Did you talk to your family or ask for their permission prior to writing the story?

No, I didn’t. When I write nonfiction, I do ask myself–-have learned to ask myself–-whose story is this? Do I have the right to tell this story? And in this case the answer was yes. It is my story. Only I have had this experience exactly like this; only I can recreate this particular version, my version, of the story. So many things can happen when birth mothers and their children, their adult children, find each other.

How have things developed in your relationship with David?

I see Dave, and sometimes his family, two or three times a year, and we email occasionally. I am trying to follow his lead. We’ve come to know the fabric of our families better, and I think we like each other. It has been difficult in a number of ways. It wasn’t just Dave, you see–-it was his wife, Pam, and then Maggie, the first child they adopted. Then they adopted Christopher. I have found it a struggle to decide what my role with them all is, to discover why I feel overwhelmed and crave distance sometimes.

What I’ve come to realize is that I need to have a relationship with Dave first. I feel that I still know very little about him. He is very quiet, and easily sinks in the background, while the rest of his family is quite animated. I
began to realize that the source of my discomfort is that I barely know this guy. Then I have what could be termed a daughter-in-law, and kids who call me Grandma Jill. I admit it feels so weird to me, feels fraudulent, feels like playing at something, like kids playing house, only in a bigger, more serious way. I’m not really a mother-in-law because I am not really a mother. His mother mothered him. I am not a grandmother, either, in these terms. There are no templates, no precedents, no code of conduct, no definition, no previous elders to learn from.

Any advice for our readers about reunion?

I’d say let compassion be a guiding force in navigating these relationships. They can be fraught, I understand. If you can’t always be kind, be compassionate.

J. Jill Robinson‘s writing has appeared in magazines and literary journals and has won numerous awards. Her first novel, More in Anger, took 10 years to write and has been published to considerable acclaim. “The Letter” first appeared in Event magazine, and was included in Somebody’s Child: Stories About Adoption, edited by Bruce Gillespie and Lynne Van Luven.