Somatic therapy: A new approach to adoption trauma | Adoptive Families Association of BC

For more than 25 years, Catherine has worked in and with the adoption community as a therapist, an adoptee, and an adoptive mom, always searching for a truly effective approach to adoption therapy. In this article, she explains an approach that she's found to be highly effective for issues related to adoption trauma.

The lasting impact of adoption loss

As a counsellor I see the impact of early experience on my clients, and as an adoptee I have first-hand knowledge of how it impacts the developing self. However, I have often struggled to help clients (and, to be honest, myself) shift core beliefs about worthiness, trust, safety, and connection.

Traditional methods of counselling just don’t provide enough of a window into the impact of early life experiences like adoption. The adopted child’s initial loss of their biological parents, and everything else that goes with being adopted, almost inevitably has a disproportionate impact on development.

Humans are not wired for this kind of early disconnection. Some people recover well, but most struggle to varying degrees throughout their lives with the effects of separation and loss.

It seems like once we understand these concepts, we should be able to use traditional therapeutic methods to think or reason our way out of limiting thoughts and behaviours caused by our early experiences. It turns out that doesn’t really work, though, and there’s a good reason why.

The sensorimotor system holds the key

We may assume that because early experience isn’t available to language and memory it’s lost entirely. Not true!

Thanks to advances in brain research we now know that the sensorimotor system can indeed remember and communicate.

We also know that we never stop using our sensorimotor system. It remains online throughout our lives, working together with all the other systems in our body. When we experience something traumatic or overwhelming, our more sophisticated brain goes offline and the sensorimotor system takes over completely.

The sensorimotor system offers a window into our earliest and most traumatic experiences. Several aspects of early experience contribute to the trauma that adopted infants experience. Firstly, birth itself is traumatic and secondly, early separation leaves the infant without the stabilizing continuity of her or his mother’s soothing presence. Her visceral presence—heartbeat, smell, voice, body—is where safety lies for a newborn.

As mammals and humans, our brains are wired for connection. The loss of the mother-infant bond can cause adopted infants to lose a fundamental sense of safety and trust in the world. Infants who are separated from their mothers for other reasons experience the same kind of trauma.

Somatic therapy allows us to access and consciously experience our own sensorimotor system and its stored information about traumatic experiences. Adoption just is one of many adverse early childhood experiences—also known as developmental trauma—that can be accessed and addressed by somatic therapy. 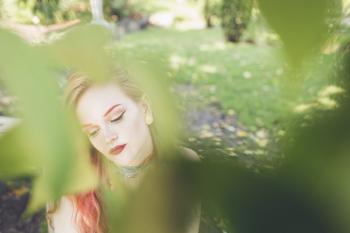 What is somatic therapy?

“Somatic” comes from the Greek word soma, or body. Somatic therapy is based on an enormous body of neurobiological research that illuminates the connection between brain and body.

One of the most astounding discoveries from this past decade of brain research is that there are twice as many nerves going from the body to the brain as from the brain to the body. This is entirely contrary to earlier understandings of how the brain and body work together.

What this means is that the body informs the brain more than the brain informs the body. We actually operate from the bottom (body) up, not from the top (brain) down. This knowledge is what guides the somatic approach, particularly with regards to early traumatic events that are experienced primarily by the sensorimotor system.

I also use relational somatic therapy alongside cognitive behavioural therapy to help clients manage mood, stress, pain, and illness, and to help cardiac and cancer patients tune in to their physiology to better manage their mental and physical health. It’s very useful in working with families, couples, and relationship issues, and it’s ideal for working with trauma. In fact, somatic therapy is currently regarded as the gold standard treatment for post-traumatic stress disorder.

So what does somatic therapy look like in practice? Many people assume it’s all about physical touch or movement. Sometimes a light touch may be involved, but it’s mostly about accessing and communicating with the sensorimotor system using its own language. This language usually takes the form of movement impulses, sensations, images, and other sensory information.

Today’s fast-paced world leaves us desensitized to our own bodies and to the language they speak. Until we slow down and cultivate awareness, our sensorimotor functioning is almost impossible to discern. When we bring compassionate awareness to bodily experience and feelings, we give the sensory motor system a voice.

Inside a somatic therapy session

A typical hour-long session of somatic therapy is a mixture of talking and somatic exploration. It begins with a conversation about the client’s concerns. If the client wants to explore something specific, or when an emotionally charged topic comes up, the client and therapist begin a somatic exploration of the accompanying sensations, images, or hand or body movements. The therapist helps the client to notice and track their sensations, verbally or metaphorically describe their experience, and slow down and explore their movements or impulses. Meaning-making and interpretation happens towards the end of the session.

Let me give you an example that helps to illustrate how somatic therapy works: sA client was telling me about a challenging situation at work. She had tried to resolve a repeating conflict with her boss but felt stymied and confused about why it felt so challenging for her.  As she described the situation I noticed that whenever she referred to this person, her hands clenched and moved back and forth, towards and away from her body. When I drew her attention to this she had been unaware of it, and so we decided to explore this together.

I asked her to slow the movement down and repeat it, noticing what happened as she did so. She became aware of strong sensations in her chest, and of emotions arising. We explored those sensations in more detail, giving them description, noticing how they changed and moved and how she felt as she stayed with the exploration.

From suffering to light

When I asked the client if the experience evoked an image or a metaphor, she described her work situation as like heavy black stone in her chest. We explored that image and what she could do with the stone. This led to her coming up with metaphorically burying it in a particular place that was associated with her boss and that had meaning for her personally.

As the client thought about doing this, she described a feeling of lightness, and a sense that she knew what to do at work to solve the problem. She came to the realization that perhaps she was taking some aspects of the job personally when in fact they had nothing to do with her. In burying the “stone” in a meaningful place for both her and her boss, her insight suggested that perhaps she was the one carrying an unnecessary burden and if she were to “bury it” in a significant place she might be able to let go of her feelings of animosity.

Not all sessions resolve with such elegant simplicity, but I can honestly say that somatic work tends to lead to profound awareness and insight more quickly than conventional talk therapy. In my experience, relational somatic therapy is the best way to access and bring healing to people suffering the effects of adverse early life experiences.

Catherine Moore is a therapist, an adoptee, and an adoptive mother. She's the co-founder of We Are Adopted, a not-for-profit organization dedicated to serving and forwarding the interests of adopted people of all ages. Find them at
www.weareadopted.ca.