The teenage brain: Its mystery and its magic | Adoptive Families Association of BC

The teenage brain: Its mystery and its magic

How our brains grow

We’re each born with as many brain cells as the Milky Way has stars—approximately 100 billion of them. These brain cells cells, known as neurons, form connections that are called synapses. They divide and multiply like wildfire, creating new cells and and forming even more connections. In a positive, healthy environment, the brain explodes with growth until around age 3.5.This frenzy of growth slows and levels off after that, but it doesn’t stop. By mid- to late childhood, a typical brain contains twice as many synapses as it did at birth.

More isn’t always better, though. Some neurons are weaker than others, and some connections are redundant or incomplete. In the tween and teen years, the brain focuses on optimizing itself through a process called synaptic pruning. It hangs on to its strongest neurons and synapses while basically starving the others to death through a process called apoptosis. This period of massive activity and upheaval impacts almost every part of life. 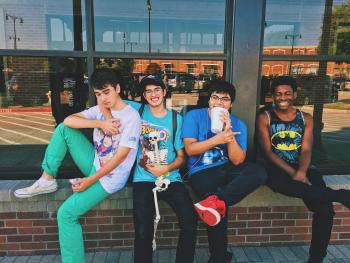 Welcome to the teenage brain.

“No one knows anything about the brain,” says brain health and wellness educator Gary Anaka. “Absolutely nothing. So I’m filling in the gaps.” The crash course on brain development he gives me over the phone is a truncated version of one of his signature workshops, “Understanding the Teenage Brain.” Trained by neuroscientists, Anaka’s mission is to decode and translate research so that everyday people can understand and use it.

That brings us back to one of the greatest mysteries of all: the teenage brain. How many parents have had someone coo over their adorable young child, only to add, “Just wait until they’re a teenager!” We’re conditioned to expect a Jekyll-and-Hyde transformation. Why? What’s going on in there?

“At about age 10–11, the brain goes ballistic,” says Anaka. “This is now what scientists determine to be the teenage brain. Most of you think teenagers do weird and wacky stuff because of raging hormones. Wrong! It’s the brain.”

The back of the brain goes online first, then the middle, then the front of the brain, Anaka explains. The prefrontal cortex or “captain” comes on last. This “captain” is responsible for what psychologists call executive functioning, which includes impulse control, planning and decision-making, and understanding consequences. When Anaka explains that the prefrontal cortex isn’t completely online until around age 25, teenage behaviour suddenly makes a lot more sense.

“In the morning they love you and in the afternoon they hate you. Everything’s fine and then for a week they’re like a zombie. They walk into walls. They do all kinds of weird stuff,” says Anaka. “The teenage brain is in biological turmoil. It’s absolutely changing, and rewiring, and the front of the brain’s coming online.”

Does that mean the less-than-pleasant parts of teenage behaviour can’t be avoided? Not entirely. There are things parents, teachers, and caregivers can do.

Believe in the brain

Many families adopt kids as pre-teens or teens, when it’s too late to have an impact on the earliest stages of intense brain development. There’s no way to change the less than ideal early starts that many adopted kids experienced, but Anaka says it’s not too late to help their brains grow and thrive now. “

The brain is plastic,” he says. “That means the brain can change. How do we do that? We never give up. We follow the basic principles, which also work for everyone, no matter how old.

Believe in the brain!”

Gary is the top Brain-Based Learning facilitator in British Columbia today. He has been a certified facilitator since 1997, receiving on-going training from the Jensen Learning Corporation, a world leader in teacher training in the new field of Applied Educational Neuroscience. His website is www.braincoach.ca.