Tree of life | Adoptive Families Association of BC

My son Gabriel has been talking about tattoos since he was about 14 or 15. He has always talked about wanting the tattoos to have some meaning for him, as opposed to just being a picture he likes. His first tattoo, which he got at age 18, was of the Liberty bell. It was representative of where he was born (Philadelphia) and says “circa 1993,” which is his birth year.

When he decided to get another tattoo, he was 19. He considered a number of options representative of important people or events in his life and ended up choosing a family tree. Over the years we’ve talked a number of times about adoptive family trees, so he was familiar with the concept of the roots and the branches. He wanted me to look at ideas with him and help him decide on a general style, and it turned out to be a really nice time for us to spend together. He then asked an artist to design something along the lines of his ideas. 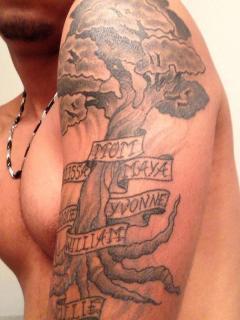 Initially, the artist put my first name at the top of the tattoo; but, when Gabe took me to see the drawing, we decided it would be more meaningful to use “Mom” instead. He chose to call his birth mother by her first name. The other names at the top are his two (adoptive) sisters. In the roots section he listed his birth mother, biological sister, and biological brothers, including the one who was closest in age to him and who died a couple of years ago. I think this was his way of marking that loss.

From my perspective as an adoptive mother, I think it’s important to acknowledge that openness can happen even when there is no direct contact. I have always tried to ensure that my kids know where and who they come from. I want them to both be proud of their roots and identify with my family. The tattoo, to me, represents my son’s desire to keep both families close to him, and to let the world know that he is proud to be who he is.

Anne Melcombe is an adoption social worker/child specific recruiter with the Wendy’s Wonderful Kids program at AFABC. A foster parent for more than two decades, Anne is a single adoptive mom of three. She is passionate about permanent family connections for children and youth.