What motherhood means to me: A daughter's tribute | Adoptive Families Association of BC

What motherhood means to me: A daughter's tribute

Janet Weinreich-Keall was abandoned [her preferred term - Ed.] at birth in Prince Rupert and adopted into a loving Vancouver family four decades ago. In this column, she reflects on the power of her adoptive mother's love, and how her complicated experience of abandonment and adoption shaped what Mother's Day and motherhood mean to her.

Mother’s Day in the adoption triad is something that isn’t always easy to celebrate or describe. It is uniquely personal and reflects the losses and experiences of those impacted by the holiday. Each year it can highlight unprocessed emotions, complicated relationships and life events, and feelings of unresolved loss.

My story is that I was abandoned before I was adopted. I was left alone on a doorstep, without a name. Within a few months, authorities chose my new parents, Jerrilyn and Gordon Keall. As an adult, I searched for my biological mother and father for more than 21 years. I finally found my biological mother 18 months ago—it turned out she lived just a four minute drive down the street from me. She passed away before I could contact her, shortly after she learned I was connecting the dots of her past: I discovered she abandoned four other babies before and after my birth.

I now know that my conception was shrouded by poor judgment and deception, but my survival and my second chance—adoption to loving parents—was purposefully chosen by her.

What makes a mother?

I reflect today on 40 years of celebrating Mother’s Day. For all of those years I celebrated my mother Jerrilyn, and I also longed to know the name of the woman who created my life. I felt torn each year as I mourned this loss. I wondered where my biological mother was and, like most adoptees, I wanted to know if she thought about me.  I needed to know that I mattered. That validation is what I sought.

Because of my unusual and painful circumstances, I understand more than ever what a mother is. The title of “mother” isn’t defined by biology or expectation. This is especially true in today’s society. The role of a mother can be fulfilled by all kinds of people: single fathers who do it all, same-sex parents, foster parents, grandmothers, stepmothers, older sisters, great aunts, and so on. 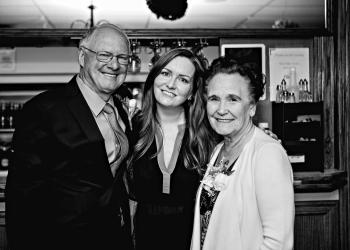 A love born from loss

Even in the best adoption stories, there’s no single winner. There’s always a loss, even with the largest of gains. It’s a delicate balance of co-existing with one’s truth while living life and allowing love and acceptance. I’ve learned there’s no validation in pointing fingers and claiming what’s right and what’s wrong. Rather than live in loss every day, I choose to appreciate the people in my support system who have filled some of the deficits and healed some of the losses caused by my abandonment.

On Mother’s Day, I recognize and celebrate my mother, Jerrilyn. She loves and accepts me for who I am, which includes respecting my birth story. Growing up with her as my mother showed me that I mattered; she showed me that my birth story didn’t define me as a person. I didn’t deserve to be abandoned. I was always worthy of love and deserving of a mother like her.

Jerrilyn has often commented on what she would have told my birth mother if she‘d had the chance. Her reply is simple: “Thank you for giving me Janet.”

I love you, mom. While one woman made my life, you made the life I have today possible. I’ll never forget how we came into each other’s lives, but I will not dwell on my birth story. Today, I choose to celebrate and appreciate all you've given me. You are my mother, always and forever.

Janet Weinreich-Keall, dubbed "Rupert's  Baby" by the press, spent more than 20 years searching for her biological family. In 2017, Janet found four half-siblings who were also abandoned as babies by the same mother in Prince Rupert, North Vancouver, and Vancouver. DNA results confirmed the identity of her deceased biological mother as well as her biological father, Emil Weinreich, with whom she's now reunited. Her story received significant media attention. Find Janet's complete story at www.janetweinreichkeall.com and follow her daily updates at www.facebook.com/janetweinreichkeall.